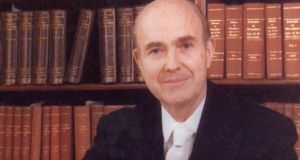 UCD law students were the winners of the annual Irish- language moot court, Bréagchúirt Uí Dhálaigh, which took place in the Four Courts.

Organised by Gael Linn and in its 16th year, it is held in memory of the late Cearbhall Ó Dálaigh, former president and chief justice. The competition gives third-level law students an opportunity to display their advocacy skills in an authentic courtroom setting before practising judges of the Supreme and High Courts.

This year’s final, between UCD and UCC, was adjudicated by Ms Justice Mary Laffoy of the Supreme Court, Mr Justice Colm Mac Eochaidh of the High Court and Séamus Ó Tuathail SC.

The main award went to the UCD team, made up of Aoibhinn Nic Cionnaith, Simon Mac Giolla Easpaig and Peadar Ó Lamhna.

1 How one couple’s weekend away resulted in 30 Covid-19 cases
2 Covid-19: College students on a break and middle-aged people in rural pub linked to large clusters
3 Taoiseach tells TD to ‘cop on’ over criticism of contact tracers asking about pubs
4 Leaving Cert Q&A: How did the errors happen and will students get new CAO offers?
5 Miriam Lord: This Government is all out of ideas. Dial 1800 – Help
Real news has value SUBSCRIBE