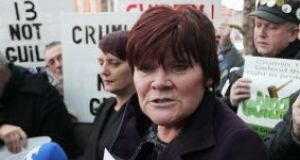 The trial of United Left Alliance TD Joan Collins and 10 others for public order offences in connection with charges related to an anti-water charge protest in Dublin, has begun at the Dublin District Court.

The trial of United Left Alliance TD Joan Collins and 10 others for public order offences in connection with charges related to an anti-water charge protest in Dublin, has begun at the Dublin District Court.

Ms Collins, United Left Alliance councillor Patrick Dunne (48), of St Gerard’s Road, Greenhills, and their co-defendants are accused of failing to comply with a garda’s direction to leave the vicinity at Parnell Road, Harold’s Cross on April 20th, 2015.

Two of her co-defendants are facing additional charges for obstructing gardaí. The group had been protesting against the installation of water meters.

Mark Ryder, of GMC Sierra, the company which installs water meters, said he and six or seven other workers started to erect barriers at houses on Parnell Road, at 7.30am or 8am on the day in question. He said he was taking materials out of a van when protestors surrounded him and other workers.

“It’s the same thing every day,” he said.

Workers could not go ahead and stood back and waited for gardaí. He said when gardaí arrived, they attempted to start work and the protestors started again. He said there was “general shouting” and people getting in the way and shouting abuse, “like any day”. He said there was a lot of commotion and a lot of confusion. There were 30 to 40 protestors on site, some were arrested and some were not. Workers tried a few times to collect the barriers and leave, but could not, he said. They eventually left at five or six o’clock.

Asked under cross examination whether he might be confusing other days with that particular day, he said “I don’t think so, anyway”.

Sgt David Lynch, of Sundrive Garda Station, said he attended the scene at 8.50am and saw six or seven people interfering with workers. He said he assisted in walking with them and people began shouting abuse and foul language. He said “f**king scumbag” was directed at him, other gardaí and the workers. They also shouted that they’d have 50 to 100 protestors and every car gardaí had would be needed to police it.

Sgt Lynch said he was concerned for a lot of young women and children passing by, who were being diverted out onto the road. He said he spoke to Ms Collins, Mr Dunne and another councillor to try to find a peaceful means to deal with the situation, to allow workers to do their work or to leave.

“Ms Collins said protestors would not be moving; they were entitled to protest,” he told the court.

He said he believed there would be a serious breach of the peace and he informed the protestors, under section 6 of the Public Order Act, they should leave.

“They became more agitated and more abusive and they sat down,” he said.

“I was told personally to f**k off by one of them.”

He said no one complied and he arrested Mr Dunne. Under cross examination, he said he believed those present heard his announcement. He spoke quite clearly, “assertively and distinctly”, he said. He agreed Ms Collins and the councillors were co-operative and agreed Mr Dunne had not used foul or abusive language.

Counsel for Mr Dunne said his client was there in his capacity as an elected person and had lawful reason to be there.

Edel Kenny (39) of Monasterboice Road, is also accused of failing to comply with a garda’s direction, but has an additional charge for obstructing a garda, as has Sofian Murphy (29) from Dolphin Road, Drimnagh.