Opinion: Separating the allegations from the evidence 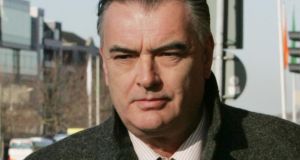 ‘On March 30th, 2000 the DPP issued a formal direction that Ian Bailey (above) should not be prosecuted on the basis of available evidence.’ Photograph: Matt Kavanagh

Sophie Toscan du Plantier was murdered on December 23rd, 1996. She was battered to death with a rock and a concrete block. Fifty wounds were inflicted on her body.

Ian Bailey was first arrested on suspicion of the murder on February 10th, 1997. He was arrested again on January 27th, 1998. On March 30th, 2000, the DPP issued a formal direction that Ian Bailey should not be prosecuted on the basis of available evidence.

In 2001, an official in the office of the DPP, Robert Sheehan, wrote a detailed and damning (of the Garda conduct) analysis of “evidence” gardaí had assembled in connection with suspicions that Bailey had murdered Sophie Toscan du Plantier. It went through every strand of the Garda suspicions, including crucial “evidence” of “witness” Marie Farrell, which claimed Bailey had been seen by her in the vicinity of the crime scene around the relevant time. Even, given that “evidence”, Sheehan’s analysis concluded: “A prosecution against Bailey is not warranted by the evidence.”

In 2003, Bailey took a libel action against several newspapers. The key witness for the newspapers was Marie Farrell. Bailey lost the libel action and huge costs were awarded against him. He appealed the finding to the High Court.

In connection with this High Court appeal, an extensive discovery order was made by a judge of that court, Barry White, of all copy statements held by the office of the DPP that suggested Bailey was not implicated in the murder. About 700 statements were “discovered” but, curiously, Robert Sheehan’s damning analysis of the evidence was not included. There were 30 documents on which privilege was claimed and were not therefore disclosed.

Meanwhile, in 2005 Marie Farrell approached Bailey’s solicitor, Frank Buttimer, and made a statement to him, stating her previous statements and evidence were false, that she had been pressurised by gardaí into making these false statements and giving perjured evidence at the libel trial.
The High Court appeal against the Circuit Court finding against Ian Bailey was settled in 2007, with an agreement that Bailey would not have to pay any of the legal costs against the newspapers and a significant contribution was made by the newspapers towards Bailey’s legal costs.

Ian Bailey and his partner, Jules Thomas, commenced their civil actions against the State – her action is based on two unlawful arrests and detentions, one in clear defiance of directions from the DPP’s office.

There then commenced an action by a French magistrate, promoted to undertake an investigation into the murder, by lawyers representing the family of Sophie Toscan du Plantier, to have Bailey extradited to France to assist in the investigation and, possibly, to face trial there. All the relevant files were handed over to the French magistrate who was appointed to investigate the case. The High Court ordered the extradition of Ian Bailey but that was overturned in 2012 by the Supreme Court, members of which had sight of the 2001 analysis of the case by Robert Sheehan – that had been handed over by a Department of Justice official to Frank Buttimer in 2011.

The “explosive” material which

apparently shocked Enda Kenny on Sunday week last, and which propelled the resignation of Martin Callinan as Garda Commissioner, was unearthed by another discovery order, this time made by another High Court judge, John Hedigan, who is now “managing” the case and who may make further orders in connection with the case on Friday.

What is obvious from the timeline is the following:

n The office of the DPP and, almost certainly, Garda headquarters and the Department of Justice, knew since 2001 that there was egregious misconduct on the part of some gardaí handling the murder case.

n The DPP’s office, the Department of Justice, Garda headquarters, along with the entire political and media establishment have known since 2005, following Marie Farrell’s statement, that she had been coerced by gardaí into making a false statement and giving perjured evidence, that there was clear evidence of corruption on the part of some gardaí in an attempt to frame Bailey.

n Nevertheless, several institutions of the State collaborated with a French magistrate in seeking the extradition of Bailey.

n Alan Shatter must have known since the Supreme Court refusal to extradite that something outrageous had occurred .

n Although there was an internal Garda investigation , nobody seems to have been fired and certainly nobody prosecuted.

So how could any further material conveying corruption in the handling of this matter have shocked Enda Kenny on Sunday week last and caused the resignation of Martin Callinan on Tuesday last?