‘I was always a happy kid, chirpy, happy-go-lucky . . . but prison really broke me’

"There is a huge amount of undiagnosed mental health problems among young offenders,” says Pat Doyle, chief executive of the Peter McVerry Trust. Forms of mental illness, depression and personality disorders, are ubiquitous in the prison population. 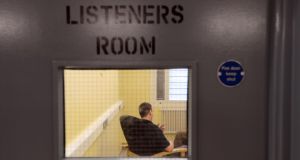 Dave* is one of the Samaritans-trained ‘listeners’ in Dublin’s Wheatfield Prison, who counsel other prisoners about mental health issues: ‘Prison is so fake . . . The listeners let you take off your mask.’ Photograph: Alan Betson

Peter* was just 17 when he first entered solitary confinement. “I had 30 days of my sentence left – I will never forget it – and I got into a fight. Because of what I did, I was put into ‘the pad’ for 24 days. The only person I could see was the priest who’d bring down a cigarette for me and we’d sit there and have a chat for maybe 10 minutes. I would try to hold him there for longer, just for someone to talk to.”

During his period of isolation at St Patrick’s Institution, he said he wasn’t allowed out of the cell to exercise and had nothing to distract him other than a few pamphlets the chaplain had left behind.

“You can go mental in the pad. You go insane in it. You can cry your f**king eyes out, punch the walls, headbutt the walls, you can do what you want but you’re not going anywhere. It’s something that will stay with me forever, the moment I got out of that pad. I was so disorientated.

“Looking back on it now, I feel angry about it. I’m 37 now, so that was 20 years ago, but it’s something that will stay with me for the rest of my life.”

Incubating problems
Prison isn’t meant to be fun, but should it be allowed to damage people’s physical or mental health? Inspection reports by Irish and international agencies over the past decade have blamed prison conditions for incubating psychological problems that then spill over into self-harming or troubling behaviour.

“Overcrowding, lack of privacy, enforced isolation and violence tend to exacerbate mental disabilities. However, there is often little access to even rudimentary mental healthcare and support services,” a 2005 UN special rapporteur report into Irish prisons stated.

Today Peter is back in society, studying and contributing to his community but he suffers from depression and anxiety, for which he takes Zispin. “That’s down to prison. I was never a depressed person. I was always a happy kid, chirpy, happy-go-lucky. But prison really f**ked with me, especially my last sentence. It really broke me.”

He speaks of the terror he experienced of having a drug debt in prison. He used heroin, which led to him owing €2,500 to a notoriously violent gang. “I knew if I didn’t pay that bill I would be sliced up bad.” He eventually got a family member to pay off the debt but still had the addiction to deal with. This led to a clash with prison authorities over access to methadone.

He fought with officers at the dispensing clinic and ended up in solitary confinement – this time in an adult prison. “It was the most horrible time in my whole life. I cried, I just wished the time away . . . I was going through withdrawals as well so I was in a pretty bad way. I was vomiting and I had diarrhoea at the same time.”

An Oireachtas sub-committee last year heard of a similar case when the Inspector of Prisons Mr Justice Michael Reilly revealed he had come across a prisoner who could not control his bodily functions, lying on the floor of an isolation cell.

Solitary confinement for self-protection has been a feature of Irish prisons. Figures last July showed that of the 211 prisoners kept in isolation, 171 were held for their own protection. Some 114 at-risk prisoners were locked up for 23 hours, while the remaining 57 were locked up for 22 hours. The other reasons for isolation are discipline and medical treatment.

Irish Prisons Service director general Michael Donnellan has said the figures are “not acceptable” and the service was aiming to reduce the number in isolation over the next 12 months. Its hand may be forced by the courts, according to The Irish Penal Reform Trust, which has cited “an increasing volume of litigation across Europe in this area”.

Mindless existence
However, it and other campaigners argue that the isolation regime is only one part of the problem. “Lack of amenities and options for constructive activity is just as damaging,” says Fr Peter McVerry. “The mindless existence of watching TV and walking around your cell all day can be almost as destructive as solitary confinement.”

“Being independent and macho is part of the image a young person has to present in prison if they are going to survive. People can let go of antagonisms in adult prison but in juvenile prison you have to retaliate. You have to be seen to get your own back, otherwise you are seen to be soft.”

Identifying vulnerable prisoners in this environment can be very difficult, not to mention diagnosing underlying or evolving mental illnesses.

What impact exactly does prison have on mental health? Prisoners themselves are emphatic on the point. “The long-term effect is that it made me really aggressive,” says Barry*, who spent much of his 20s and 30s in jail but is now back living with his girlfriend and children in Dublin. “I find it really difficult to have a conversation with a person without thinking there’s an ulterior motive. I’m doing counselling now for relationships and to be a better father.”

Solitary confinement played a role in his mental state. He was locked up for months at a time for his own protection after being attacked with a blade. “There is an expectation as a prisoner you have to maintain an ego and the prison officers might say I became more violent or aggressive in prison. Today, looking back, I assume I became harder in the sense of I wasn’t willing to listen to anyone any more.”

Regarding suicide and self-harm, committal is a time of high risk. “I remember just this feeling of fear, you don’t know what the rest of your future is,” says Dave* (32), who is three years into a life sentence at Wheatfield Prison. When he first entered the prison, he had bottled up all his emotions.

Listeners
“I was walking around the yard one day and this guy asked me how was I.” Dave had bumped into one of the prison’s “listeners”, fellow inmates trained by the Samaritans, and he has since become one himself.

“Prison is so fake. You come in and for protection you put out your chest and walk around like nothing is bothering you. The listeners let you take off your mask.”

Those in solitary confinement are among the biggest users of the service. “If you are in a single cell for 23 hours a day the smallest problem is magnified . . . We don’t wrap our arms around them and tell them everything is going to be okay but we try to help them explore their options.”

But shouldn’t prison be a harsh environment? “If you keep locking people up and treating them like animals they will keep coming back,” Dave replies. “Everybody has to be let out at some stage.”

For Barry, the mental strain of prison life is still being felt on the outside. “After all that stress, coming out and trying to interact with people is a big adjustment. Often I found I’d only just be back out and my paranoia would come up again and I’d react to something and I’d end up going back down. It became a sort of revolving door.”
* Names have been changed to protect identities.