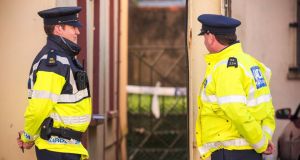 Gardaí investigating the murder of a young woman in her home were questioning a man last night after he was discharged from hospital where he received treatment for self-inflicted knife wounds.

The suspect was known to the dead woman. Natalie McGuinness (23) was from Easkey, Co Sligo, but was working in Sligo town.

The suspect was at her house on Mailcoach Road when gardaí arrived early on Wednesday morning. He was carrying a knife and Garda sources said he was in an agitated state when confronted by armed members of the Regional Support Unit (RSU). Paramedics had arrived a short time earlier.

A large amount of blood was visible at the house, and gardaí are working on the theory the suspect cut or slashed himself with a knife.

Sources said the suspect did not comply with requests by the RSU members trying to arrest him and a Taser stun gun was used to subdue him.

While the investigation was still in its early stages on Wednesday night, gardaí believe the killing arose from a disagreement.

Officers said they were not seeking anyone else in relation to the investigation, and were expecting to be in a position to bring charges in the case as early as Thursday.

Ms McGuinness was still alive when paramedics arrived on the scene. She was treated in the house before being taken by ambulance to Sligo Regional Hospital. She was pronounced dead at the hospital at about 11am.

The 33-year-old suspect was also taken from the house to the same hospital where he was treated for his injuries.

He was kept under observation by gardaí while undergoing treatment for much of the day, until he was discharged in the early evening.

He was immediately arrested under section 4 of the Criminal Justice Act and taken for questioning to Sligo Garda station where he can be held without charge for up to 24 hours.

The man has more than 20 previous convictions for offences including assaulting a garda.

Gardaí said while the cause of death would not be known until a postmortem was completed, it appeared Ms McGuinness had injuries consistent with being beaten or strangled.

The house was examined by the Garda Technical Bureau throughout the day.