Shatter intervenes in row between Garda Commissioner and Ombudsman 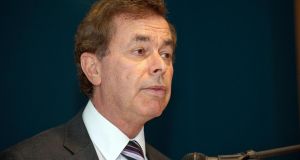 Minister for Justice Alan Shatter has intervened in an unprecedented row between the Garda Síochána Ombudsman Commission (GSOC) and Garda Commissioner Martin Callinan.


Minister for Justice Alan Shatter has intervened in an unprecedented row between the Garda Síochána Ombudsman Commission (GSOC) and Garda Commissioner Martin Callinan, calling both to a meeting with him to resolve their differences.

In an exchange that represented a new low in the sometimes difficult relationship, the ombudsman accused the Garda of delaying and failing to co-operate with its biggest inquiry to date.

It investigated allegations that some members of a Garda specialist unit, including senior officers, allowed convicted Co Louth drugs trafficker Kieran Boylan to continue dealing drugs in exchange for information on other dealers he was supplying.

The Director of Public Prosecutions, Claire Loftus, has already directed that no charges be brought against any gardaí. Sources say she has no concerns about the safety of convictions secured against drug dealers on the basis of information supplied by Boylan.

The ombudsman decided to send the report on the investigation to Mr Shatter rather than pursue disciplinary proceedings against individual gardaí it believes are guilty of breaching regulations or wrongdoing. However, it also said key new protocols around the handling of informants, introduced in the aftermath of the Morris tribunal, had not been adhered to. In addition the ombudsman urged Mr Shatter to give the commission unfettered access to the Garda’s Pulse computer database.


Secret
One of the three ombudsman commissioners, Kieran Fitzgerald, said he was concerned informants could still be handled in a secret fashion by gardaí, a practice known as “off the books”. “We are concerned the possibility exists that information could still be collected from informants in an ad hoc manner,” he said.

On the issue of Garda delays, he said that while gardaí were obliged within 30 days to comply with requests for information from the ombudsman, this timeframe had only been met in 18 of the 63 requests made during the Boylan investigation, with 10 requests taking between 300 and 600 days to process.

Mr Callinan said he regretted that the ombudsman had blamed his force for the long delays with its investigation and insisted the Garda did co-operate. He added that the complaints watchdog had published a report without forwarding it to the Garda in advance to allow it time to review and respond to it. “The difficult reality is that at times the people who are in possession of useful information have that information because of their background,” he said.


Difficulties
Mr Shatter intervened yesterday evening, saying it did not “serve to encourage public confidence in GSOC for difficulties or arguments to persist privately or publicly” about the timely provision of information to the ombudsman; an independent body which began operating in 2007 and investigates complaints made about gardaí.

He said he had asked Mr Callinan to review the ombudsman’s statements around what it said was the “highly unsatisfactory” level of co-operation it had received from the Garda when investigating the allegations at the centre of the Boylan case.

When he had received the observations he intended to hold a meeting with Mr Callinan and ombudsman commission personnel to ensure “any difficulties ... have been resolved fully”.