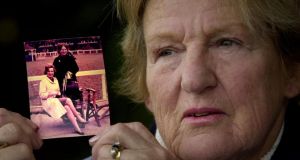 Stella Nolan holds a photograph of her and her sister murder victim Sylvia Shiels, taken in the early 1960s at the horse show in the RDS. Photograph: Bryan O’Brien

The sentence hearing of Mark Nash, convicted of the murder of Sylvia Sheils (59) and Mary Callanan (61) in Grangegorman in Dublin in 1997, has heard a victim impact statement from relatives of one of the deceased.

The statement was read to the court Suzanne Nolan, niece of Sylvia Sheils, on behalf of her mother Stella Nolan (Sylvia’s only sister).

The statement said Sylvia and Mary’s lives had been taken from them in a most brutal way in pointless, senseless killings.

“It was Friday 7th March, when I heard the news that my sister, Sylvia Sheils, had been murdered while she slept in her bed. That was 18 years ago last March.

For 18 years, justice has been delayed and justice delayed is justice denied. Not only for me, but for my family. Murder does not affect one person only - it affects the whole family.

Death - as hard and all as it is inevitably to deal with - is a natural event. Murder is not. It is the illegal, unlawful taking of the life of another. It is the most fundamental crime in my view.

It has been incredibly difficult and painful for me and for all my family to deal with the consequences of Sylvia’s life at the age of 59 years being taken the way and it was equally difficult to live through the past 18 years waiting for justice - through judicial reviews, appeals and review processes; waiting to see the perpetrator of the crime held accountable.

These murders have affected the lives of three families - Mary’s and Sylvia’s - but also the family of Dean Lyons, an innocent man imprisoned for 9 months for their deaths.

My sister Sylvia was a peace-loving, gentle and sincere person. She was never violent. She lived a quiet life. She had been a civil servant for 20 years. She worked in the Valuation Office as a draughtsman and took early retirement.

She was educated in Loreto Abbey Dalkey and Loreto Convent Kilkenny. Sylvia was well-read and loved music. She played chess and was well informed of politics and every day affairs.

Her life was as valuable to her as each person’s is to them.

I often talk about her to my grandchildren. But they will never know her, although some of them are very like her. This is such a sad loss, and it is also a constant reminder of what happened to her. Nothing can ever change that. So for me there is no joy, only sadness and loss.

Life is a gift. It can’t be bought, won or earned but Sylvia and Mary’s lives were taken from them in a most brutal way (pointless, senseless killings) and it’s hard to understand how one human being could do that to another.

It has been extremely difficult to attend this court and hear the details of the violent assault on my sister and Mary, as well as see the many instruments used to kill and mutilate them.

She was my only sister, my younger sister. For me, it’s taken all my reserves of strength to attend this trial. I was 63 when the murders were committed.

I’m now 81. The impact on my life of the most horrific and savage murders is massive and it continues to affect me and my health. It also affects all of my children and my family as they try to support me.

Sylvia and Mary’s lives were taken from them while they slept in their beds. They had mental health issues and they were vulnerable women. They were completely innocent.

They played no part in what happened to them. They had a human right for their lives not to be taken from them. Nothing or no one can undo what has been done. I can forgive the sinner, not the sin - it can never be forgotten.”