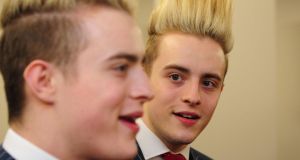 John and Edward Grimes aka Jedward pictured in 2012 after arriving home from the Eurovision song contest in Azerbijan, where they represented Ireland. Photograph: Aidan Crawley/The Irish Times

A Ryanair flight attendant who was accused of harassing Jedward on board a flight by a superior when asking for their autograph has lost her case for constructive dismissal.

In the case before the Employment Appeals Tribunal, Karolina Jabczuga lost her case for constructive dismissal against Ryanair following her 2012 resignation.

In evidence heard over four days in Dublin, the tribunal heard Ms Jabczuga approached Jedward on a Ryanair flight from Dublin to Manchester on Christmas Eve in 2009 and asked for their autographs.

Ms Jabczuga was aware that, per the company manual, cabin crew were not to talk to celebrity passengers.

A Polish national, Ms Jabczuga was subsequently told by her base supervisor she had harassed the twins and was not to do so again.

The tribunal also records there was no complaint from Jedward, also known as John and Edward Grimes.

The tribunal found that some two years later the same celebrities were on board a flight “and, despite Ms Jabczuga counselling against it, some members of the crew approached the passengers, both during and after the flight, and had photographs taken with them. No action was taken against any of these crew members”.

Ms Jabczuga wrote to the Ryanair European Bases Manager, Emer O’Callaghan about the differing treatment she and her colleagues received.

The letter was dated December 4th, 2011 but it was not given to Ryanair until July 18th, 2012. “This was well outside the time delimited in the grievance procedure for the raising of grievances,” the tribunal said.

Ms Jabczuga also had a grievance in relation to a Ryanair captain making a report about her in the manner in which she opened the cockpit door to allow the captain re-entry.

On a flight on June 28th, 2012, Ms Jabczuga went to the flight deck in the captain’s absence.

Ms Jabczuga said the first officer had given her permission to do so and she had been able to see the person at the door was the captain.

On foot of the captain’s report which Ms Jabczuga complained about, three other staff members, including the captain, were interviewed and reports furnished to Ms O’Callaghan. On August 21st, 2012, the bases manager informed Ms Jabczuga she had been unable to find any evidence to support her complaint.

Ms Jabczuga’s main grievance was being overlooked for promotion and promotion for cabin crew is based on average spend, attendance and general performance.

However, the tribunal stated that on foot on evidence provided by Ryanair, it was satisfied that Ms Jabczuga was not unfairly overlooked for promotion.

Ms O’Callaghan told the tribunal the Jedward incident had no bearing on Ms Jabczuga’s failure to receive a promotion.

She gave “discrimination, bullying and harassment in the workplace” as the reason for her resignation.

On foot of her resignation notice, Ms Jabczuga was invited to a meeting with Ms O’Callaghan and the issues discussed at that meeting were her lack of promotion, the passenger issue and the captain issue.

In its determination, the tribunal stated: “It seems clear that the claimant was becoming increasingly frustrated in her employment and, in particular, with her lack of promotion. It would appear that the captain incident was the catalyst that led to her resignation.”

The tribunal stated that in this case, Ms Jabczuga failed to fully engage with and exhaust the grievance procedure available to her.

“In resigning in circumstances that a claimant asserts amount to constructive dismissal, such claimant must act reasonably. This includes affording her employer an adequate and reasonable opportunity to address and remedy any grievance. By resigning before the grievance procedure had run its course the claimant did not afford this opportunity to the respondent and the Tribunal is satisfied that she did not reasonably in so doing.”