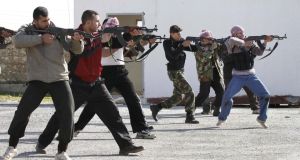 Gardaí and the Government do not have enough ties with the Islamic community to sufficiently monitor radicalised Muslims returning to Ireland after fighting in Syria and Iraq, an imam has warned.

While that contact would be beneficial in establishing good relations, he said it could also be very valuable for intelligence on those being radicalised or seeking to radicalise others.

“Someone who may be reluctant to speak to a Garda, who is not a Muslim, about these issues – with a Muslim (garda) they may be more comfortable. It’s really important,” he said. “And all of those who have returned from Syria and Iraq after fighting; they should be definitely, definitely, definitely observed.

“People who have gone to Iraq and Syria - they go with a particular ideology and belief: ‘We are fighting the West, we are fighting the non-believers and it is justified, we should be doing this and this is our duty’.

“When they go to Syria, they receive training and they become very familiar about how to use weapons. They get military training. And once they come back, I believe, of course they are a threat. They are definitely a threat.

“And even though that threat is very small, we need to realise the possibility exists and the Muslim community in Ireland needs to have a plan to deal with it. The gardaí also need to sit down with the Muslim leadership and tell them about these people.

“And really, they need to organise to meet them . . . even though there is a high possibility they have been radicalised. But these people need to be observed, really.

“They may not do something,” he said, referring to a possible terrorist attack in the Republic. “But they can radicalise others and this is a chain. And as the chain increases, you don’t know who is going to be affected, who is going to be stupid enough to do an act like that.

“There is radicalisation and young Muslims are being recruited,” he added of a small number of young Muslims living in Ireland being primed to travel abroad to fight or attack “the West and non-believers”.

“Most of the youngsters who become inspired to go to Syria have been inspired through Facebook pages,” he said.

In some cases, the parents of young Irish Muslims had “no idea” they were being radicalised until after they had left Ireland to fight in Syria and Iraq.

“The parents had no suspicions at all; nothing was out of place. In the cases I know about, all of the radicalisation took place through social media.”

He believed while Government agencies had reached out to establish a relationship with two mosques in Dublin, less than 5,000 of the estimated 60,000 Muslims in the Republic worshipped there.