Response to gang killings high on optics, low on substance

Putting more gardaí on the streets ignores the causes of crime, say experts 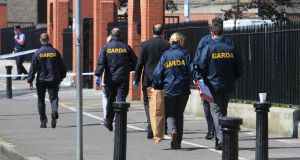 The combination of a taskforce, a mini-Cab and saturation policing forms part of the classic political response. File photograph: Gareth Chaney Collins

The Government’s response to the brutal spate of gangland killings in Dublin was expected and predictable. The combination of a taskforce, a mini-Cab and saturation policing forms part of the classic political response – high on optics, not so high on substance.

No politician has ever gone broke pumping up the volume on crime. Get-tough policing policies are the order of the day in response to inner-city murders or rural burglaries.

In the past 12 months rural crime was the main talking point. Concern was heightened after a number of violent attacks on families, yet there was no real evidence to support any tangible increase in the rate of rural crime.

Such announcements have a history. In the 1980s and 1990s, Operation Shannon was aimed at stopping gangs crossing the Shannon to carry out raids. Then there was the “zero tolerance” approach of Fianna Fáil’s John O’Donoghue, and the race by all parties to get Garda numbers up to 15,000.

Gary Gannon, a Social Democrats councillor and community campaigner in Dublin’s north inner city says that while more gardaí are needed on the streets, the response ignores the wider problems in the community.

“What’s needed is a systemic and multifaceted response,” he says, arguing it should take in everything from early intervention in education to housing. He cites the Young Ballymun initiative which has had tangible results in keeping young people in education.

He also questions the new mini-Cab threshold of €1,000, which he says would mostly affect younger “drug mules” who are addicts and who deal to pay off their own debts.

“There’s a multinational cartel here with hundreds of millions of euro. Targeting the lowest people on the chain [with assets of €1,000] seems to me a contradiction of what we understand to be the problem,” he says. “If that’s the response it’s back to policing for the purposes of PR.”

“We are trying to bring people away from the problem of drug use and move them into education and beneficial normal life patterns.

“We are not seeing any of that kind of response. Underlying this is the other violence, which is poverty. It’s not just income poverty, it’s the poor housing fabric, the educational deficits.”

“Crime is a very easy issue for the opposition. It’s an emotional issue. Everybody wants to be safe in their beds. It’s the same for whatever government, be it Fine Gael or Fianna Fáil. The Opposition can criticise them for not being tough enough.”

He says some crime is cyclical and he is not sure if the response has the desired impact in many cases. However, he does cite the “significant success” of highly visible policing in Limerick in combatting gang warfare there.