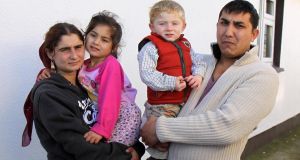 Roma parents Loreda and Iancu with their two children Regina and Iancu junior (2), who was taken into care earlier this week. 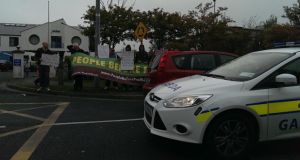 Protesters carried placards which read “no to Gardaí supporting racism” and “cuts to child welfare, no cuts to racial oppression”. 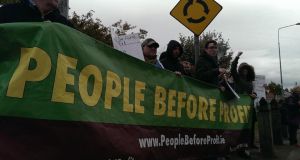 Iosif Ungureanu, president of Omepado - an organisation which supports Romanian citizens throughout Europe on human rights issues - said the events of the past week were “not normal”.

The events that led to the removal of two Roma children from their families this week because they did not resemble their biological parents were “not normal,” a Roma rights activist said today.

Speaking at a protest outside Tallaght Garda station, Iosif Ungureanu, president of Omepado - an organisation which supports Romanian citizens throughout Europe on human rights issues - voiced concerns at the events of the past week.

“We don’t think of this case as one single example,” he told The Irish Times with the aid of a translator.

He claimed that the Dublin-based family had been “abused” when their child was taken away for a DNA test and that things could have been done in a “totally different” manner.

He added that he would be seeking to contact the family in Dublin, the gardaí and the Romanian embassy for their side of the story.

Speaking earlier, Minister for Children Frances Fitzgerald said the Government would look at amending the Child Care Act in the event that the Ombudsman for Children recommended that changes should be made to the legislation.

“If there are lessons to be learned here, or if there are any changes necessary, of course government will consider those,” Ms Fitzgerald told RTÉ radio.

Minister for Justice Alan Shatter yesterday gave the Ombudsman for Children Emily Logan additional powers to interview any members of the Garda, even though her remit is limited to the HSE.

Two internal reports from the HSE and the Garda, meanwhile, are due to be completed within a fortnight before then being submitted to the Ombudsman’s office.

The investigations were prompted by the removal of a seven-year-old girl, with blonde hair and blue eyes, as well as a fair haired two-year-old boy from their homes in Dublin and Athlone this week on the basis of claims that the children did not resemble their biological parents.

Following DNA tests it was subsequently confirmed that both children had been living with their biological parents.

Today’s protest was organised by People Before Profit (PBT) and those in attendance urged drivers to beep against “racism (and) hate” while shouting “Ireland is a racist state”.

People also waved placards which read “no to Gardaí supporting racism” and “cuts to child welfare, no cuts to racial oppression”.

People Before Profit party member and Dublin City Councillor Bríd Smith said the Roma people have a history of having their children taken from them in different countries throughout the world.

“The state has a very clear racist view of Roma people globally,” she said while adding that the events of the past week were “shocking” and “appalling”.

“Had it been an Irish child, or indeed any other white child or any other child...there would have been much more outrage than there is,” she said.

Councillor Smith also said that the reaction from many politicians on the issue was “deafening quiet”.

Stelian Ciuciu, co-ordinator international of Roma Integration Ireland, said that the image of Roma people is very important and that media coverage of this week’s events were “not good” for it.

He also said that he feels the Roma community has been discriminated against and that its members in Dublin are very afraid, adding that was the reason why many of them had not come to today’s protest.

People Before Profit local election candidate Nicholas Coules said that the state’s actions on the issue give “official sanction” to racism in Ireland.

“I feel that the state and in particular the guards have been pandering to regrettable racism in Irish society,” he said. “Their action against these Roma children is just a knee jerk reaction to what’s happened in Greece."

As part of an independent inquiry both gardaí and social workers will be legally obliged to answer questions on their roles in removing the two children from their families.