Recognising and dealing with growing issue of cyberabuse

US organisation has linked up with Safe Ireland on a project that will train service providers, gardaí and judges to deal with cyberabuse 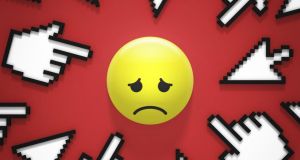 Of 346 respondents to a survey of victim services in the US, 97 per cent said domestic and sexual assault victims who seek services are being harassed, monitored and threatened by offenders misusing technology. Photograph: Getty

Technology is – usually – our friend. It lets us hail a taxi and turn on the heat before we get home.

But it has a dark side too. It facilitates new forms of cyberharassment, stalking and other types of abuse, while those perpetrating it remain under the cover of anonymity.

“When we think of stalking, we think of someone hiding behind a bush or in a car, but in Ireland technology is the way forward. We see abuse on social media, mobile phones, constant texting,” says Deirdre Lawlor of the Dublin 12 Domestic Violence Service.

“We’re looking into teen dating abuse, which is getting huge. A lot of young girls are giving their boyfriends their [social media and email] passwords.”

The US-based National Network to End Domestic Violence (NNEDV) carried out a survey of victim services in the US last year.

Of the 346 respondents, 97 per cent said domestic and sexual assault victims who seek services are being harassed, monitored and threatened by offenders misusing technology.

The programme will train advocates, service providers, government agencies, gardaí and judges to recognise and deal with cyberabuse. It will educate people to use technology safely while maintaining privacy.

“When we did our survey, we found that the majority of technology monitoring by offenders is happening via social media and text messaging. That’s what was bubbling up in conversation with Irish advocates,” says NNEDV’s vice-president Cindy Southworth, who was in Ireland earlier this year to train victim advocates.

“They’re really struggling with how victims can maintain a presence on social media after basically leaving an abusive partner.

“And the whole point is they’ve been isolated and cut off from family and friends, so we want them on social media,” she says.

Ms Southworth also advises some of Ireland’s leading tech companies about how to keep devices and platforms safe for victims and consumers in general.

Caitríona Gleeson, programme manager at Safe Ireland, says she is looking forward to adapting the Safety Net model to an Irish context and linking it to Irish laws.

She says Safety Net’s launch is tentatively planned for September, provided they can secure enough funding and government commitment by then.

“To tell someone not to use technology is to further disempower and isolate the person.

“It’s not that the technology is bad. The mobile phone isn’t going to hurt you, but how someone uses it can control you,” Gleeson says.

“We have a lot of work to do in Ireland . . . within our legal system particularly.

“We want to bring increased awareness to gardaí and judges so that when a woman is going into a Garda station, gardaí are equipped to ask the key questions,” she says.

If a former partner always knows where you are, a key question might be, “Were you driving your car on the days your ex showed up?”

If so, your car could have a GPS device used for tracking. If not, your ex might be accessing location data from your phone.

“Those patterns help identify what technology is being misused. The last thing we want is a victim going to the gardaí and saying, ‘I’m being tracked, but I don’t know how.’ That’s not likely to get a strong response.

“But if they can go in and say, ‘I’m pretty sure my phone has been compromised. Over the past three months my ex has shown up at 16 places where I’ve been. It’s always been when I’ve had my phone, and I have a stalking log.’ There’s a much higher likelihood the officers will sit down and take that report and climb into the case,” says Southworth.

She says the next step is training judges. In the US, more judges are including text, phone and social media contact bans in protection orders.

“That’s not something we’ve heard the judges are doing yet in Ireland, but the advocates were very excited about the possibility.”

“We have stalking laws at the moment, but there’s a debate whether the law is up to date with cyberbullying and technology, so this is a question that the Law Reform Commission are looking to have answered at the moment,” Gleeson says.

“We have lots of laws that aren’t being implemented consistently. So do we have to go through legislative change? Or can we just upskill to understand that if somebody is listening to me via a new form of technology, it’s still tapping?”

Southworth would rather use current laws to address cyberabuse than rely on legislative change. “If every time a new device comes out we update the law, eventually we’re going to say, ‘You can’t stalk by using a computer that’s part of your watch.’

“What happens when it’s no longer a part of your watch, and the computer’s a part of your earring? Let’s not go there. The behaviour is what’s relevant, not the technology medium.”

Number of Covid-19 hospital patients rises slightly as close contacts drop 13:02
No agreement reached on reopening special needs schools – Fórsa 09:08
Mary’s story: Roscommon woman believed a lifetime of exile was as it should be 06:00
Covid-19: Nursing homes to be prioritised for vaccination for 10 days amid supply shortage 01:00
Plan for second set of Leaving Cert exams for Covid-affected students under consideration 01:00