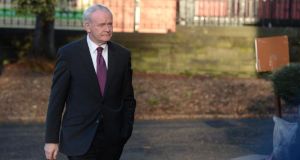 Police investigating the sudden death of a man in Derry have ruled out a crime.

The body of Conall Kerrigan (25), a plumber from Claudy, was found between two walls at the rear of the Millennium Forum in the Bank Place area of Derry on Sunday night.

He had been out drinking with a number of friends in the Metro Bar in Derry’s city centre.

The Police Service of Northern Ireland (PSNI) said that although it was still awaiting some results from a postmortem examination, at this stage it did not believe his death was the result of a crime.

“We know that he was in the Metro Bar and left there and was seen on the city walls,” he said. “From an extensive trawl of CCTV footage, we know that a number of people saw him and spoke to him.

“At one stage, Conall left the walls and went down into Foyle Street.”

“We would like to hear from anyone who was in the city centre generally on Sunday morning and knows or has heard of attempts to steal wallets from other people,” Mr Hamilton said.

The last confirmed sighting of Mr Kerrigan was at 2.45am on Derry’s walls. The postmortem has not conclusively established a time of death.

Mr Kerrigan was a popular GAA player. A statement from John Mitchel’s GAC Claudy club said he was a “huge character”.

“His passing hurts us all. There are just no words that will make sense of this, and everybody is struggling to come to terms with it,” the statement said.

“My sympathy and thoughts are with the parents and family of young Claudy man Conall Kerrigan on the tragic loss of their son,” Mr McGuinness wrote on Twitter.

Anyone with information, or who saw Mr Kerrigan, is asked to contact the PSNI at Strand Road station.