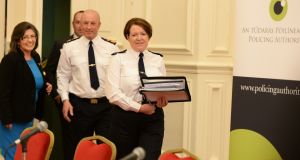 It may have had the air of a first day of school about it, but the good people of the Policing Authority were never going to demand lunch money from Garda Commissioner Nóirín O’Sullivan.

The line of questioning at what was the first public session of the authority was gentle and genteel.

The answers were mostly delivered in an assured and confident manner, though detailed responses were very thin on the ground.

One was left with the distinct impression that the Garda has a “major new policy document and strategy” for just about everything, from public order hot spots to diversity in recruiting, gender balance and community policing, among many of the issues touched upon over two hours at the Royal Hospital Kilmainham, Dublin, yesterday.

How they are even formulating all the strategies outlined, let alone executing them, when they are so chronically short-staffed, is anyone’s guess.

But while the historic first public questioning of the commissioner and her team wasn’t a “jackets off and roll your sleeves up job”, one suspects it has the potential to get more robust, which it will need to very quickly to have any credibility.

There were a few incidences yesterday of a follow-up question begging to be asked that was let slide.

For example, it emerged that the Garda has been quietly conducting public attitude surveys into how it and the level of service it provides are perceived.

On several occasions the senior officers answering the questions referred to the high levels of confidence in the Garda coming through in the surveys, as proof that everything was good in the world.

Instead of specifics he gave an overview, outlining how satisfaction is generally higher among women than men and that the older respondents were, the more satisfied they were with the Garda.

Similarly, when former PSNI deputy chief constable Judith Gillespie sought details on how the Garda identified public order hot spots and tracked them, deputy commissioner John Twomey said the consumption of alcohol in public places was a serious issue in the summer, though at other times of the year the priorities for public order policing changed.

There was then some general chat about the effectiveness of the junior liaison programme, which we were told was 50 years old.

When Gillespie suggested it was not only young people involved in public order crime, the conversation moved on.

The only real fact stated in that lengthy section of the meeting was that 161 antisocial behaviour orders had been issued this year.

You were left with the feeling that there was either lots more to the Garda’s public order policies, or that there wasn’t much of a policy at all. But there was no clarity either way.

And, while the number of road deaths had crept marginally higher so far this year compared to the same period in 2015, the continued onslaught by the Garda against road traffic infringements sounded like real police work.

Though assistant commissioner John O’Mahoney explained drink driving checkpoints were fewer in number now – because the Garda Traffic Corps is down to 700 members from 1,200 – still 40,000 people had been caught speeding this year.

And therein lies the great opportunity for the Garda, if they have the confidence and courage to take it.

These public sessions can be a public inquisition that senior officers do their best to come through with only minor injury while continuing Garda headquarters’ tradition of hoarding information for the sake of it.

Or they can be the force’s most valuable mechanism in its history to finally open up and sell with confidence the story of cops catching robbers, even if they must acknowledge some shortcomings along the way.