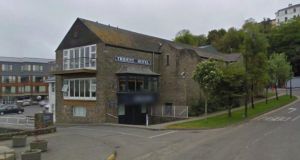 A plumbing and heating contractor has been charged with the manslaughter of a woman who died from carbon monoxide poisoning following a gas leak in the Trident Hotel, Kinsale. Image: Google Maps

A plumbing and heating contractor has been charged with the manslaughter of a woman who died from carbon monoxide poisoning following a gas leak in the Co Cork hotel over two years ago.

Richard Davis (44) from Ballygarvan, Co Cork was chargedtoday at Macroom District Court with the manslaughter of Miriam Reidy (35) at the Trident Hotel in Kinsale, Co Cork on January 9th, 2011.

Mr Davis was also charged with two breaches of the Health and Safety Act when he appeared at the court sitting, where evidence of arrest, charge and caution in relation to the manslaughter charge was given by Det Sgt Fergal Foley.

Supt Liam Horgan told the court gardai were not objecting to bail for Mr Davis.

Judge James McNulty remanded the accused on bail to appear again at Kinsale District Court on September 19th. He made it a condition of Mr Davis’s bail that he surrender his passport and sign on once a week at Togher Garda station.

Ms Reidy, who was originally from Ballyhahill, Co Limerick but was living at Sunday’s Well, Lisloose, Tralee, Co Kerry, was one of a group of 25 friends attending a hen party weekend for her cousin Marie Reidy in Kinsale when the tragedy happened.

Ms Reidy was staying in Room 113 in the Trident Hotel with her sister Patricia, who also took ill and was taken to Cork University Hospital where she spent over a week before she was eventually discharged.

In June 2011, an inquest into the death of Ms Reidy, who worked with AIB in Killarney, was opened by the Coroner for West Cork, Frank O’Connell. Assistant State Pathologist Dr Margot Bolster gave evidence that Ms Reidy died from acute carbon monoxide poisoning.

No traces of alcohol or drugs were detected in Ms Reidy’s system, nor did she have any other injuries or conditions, she said.

Insp Brendan Fogarty applied under Section 25 of the Coroners Act 1962 to have the inquest adjourned pending a decision by the DPP on whether criminal charges were to be brought in the matter and Mr O’Connell granted the application and adjourned the inquest.