Payouts of more than €1m approved for Bloody Sunday victims 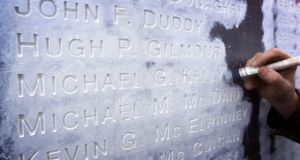 A workman restores a memorial listing the names of people killed on Bloody Sunday in the Bogside area of Derry. FilePhotograph: Paul McErlane/Reuters

Nine actions on behalf of people killed by British soldiers in Derry in January 1972 have been settled for £75,000 each, while five of those wounded are to receive £50,000.

The resolutions were confirmed at the High Court in Belfast on Thursday as part of a series of lawsuits against the Ministry of Defence.

Thirteen people were shot dead when members of the Parachute Regiment opened fire on civil rights demonstrators. A fourteenth person injured during events on the day, which became known as Bloody Sunday, died later.

Claims were brought by victims and their families after a major tribunal established the innocence of all those shot.

The Saville Inquiry’s findings in 2010 prompted the then prime minister David Cameron to publicly apologise for the actions of the soldiers. He described the killings as “unjustified and unjustifiable”.

With liability accepted, the cases centred on the level of damages to be paid out.

Last month, a judge awarded Michael Quinn £193,000 for injuries inflicted when he was shot in the face as a schoolboy on Bloody Sunday. That led to settlements being announced in another two test cases.

The widow of Gerry McKinney, a father-of-eight, received £625,000 compensation for his death.

Lawyers on Thursday announced resolutions in similar actions featuring unmarried victims with no dependants at the time. The 14 cases involved a combined total of £925,000 in damages, plus costs.