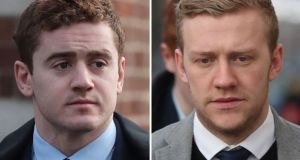 Former Ireland and Ulster rugby players Paddy Jackson and Stuart Olding are to pay the BBC £20,000 in costs after their civil action against the broadcaster was resolved at the High Court in Belfast. File photographs: Niall Carson/PA Wire.

Former Ireland and Ulster rugby players Paddy Jackson and Stuart Olding are to pay the BBC £20,000 in costs after their civil action against the broadcaster was resolved at the High Court in Belfast.

The men were relieved of all playing duties while the legal proceedings were taking place and after the trial concluded their contracts were revoked following an Ulster Rugby and Irish Rugby Football Union review.

Their lawyers had commenced civil actions against the BBC in November 2016 and February 2017 around privacy matters but this was adjourned several times as the criminal proceedings continued.

On Wednesday morning the litigation against the BBC, over its initial coverage of the men’s questioning by police, was disposed of by consent at the Royal Courts of Justice in Belfast.

Previously the men’s lawyers had issued writs seeking damages over information published months before they had been charged. They had argued that this constituted a breach of privacy and that the BBC had not followed its guidelines on allowing adequate time for a right of reply.

Richard Coghlin, lawyer for the BBC, on Wednesday requested that the men’s separate actions be consolidated into one. He also asked the court to enter judgment in favour of the defendant against the plaintiffs and order them to pay the BBC’s agreed costs in the sum of £20,000 plus VAT.

A six week stay on enforcement of the order for the costs to be paid was requested and approved.

A lawyer from KRW Law - Peter Girvan - told the court he had nothing to add as the position had been put “accurately and fairly” by the BBC lawyer.

Kathleen Carragher, head of BBC News NI, said she believed that the players’ acceptance of judgment against them vindicated the BBC’s journalism.

“We argued throughout this case that our reporting was responsible, accurate, in the public interest and observed the BBC guidelines,” she said. “We are pleased that the players have accepted this outcome and have also agreed a contribution to our legal costs.”

The Irish Times has requested a statement from Mr Jackson and Mr Olding’s legal teams.

On the BBC’s full legal costs a spokesman said it would not be appropriate for it to disclose this.

Mr Jackson has also accepted a judgment against him in connection with another court related action against freelance sports journalist Orla Bannon who had been working for the BBC.

A statement via the BBC from Ms Bannon said: “I’m happy that Mr Jackson has accepted that judgment should be entered against him in the court action which he took against me for my role in this story. I feel my journalism and integrity have been vindicated.”