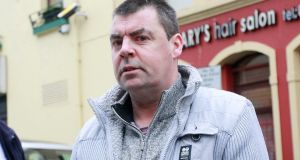 The case against the only remaining suspect in the Omagh bomb Seamus Daly has collapsed after the evidence provided by a civilian witness last week was called into question. Photograph: Peter Morrison/PA Wire

Prosecutors in the North have dropped all charges against Seamus Daly in connection with the 1998 Omagh bomb in which 29 people died.

At Ballymena Magistrates Court the Public Prosecution Service (PPS) confirmed it was offering no further evidence and all charges were being withdrawn against Mr Daly, who was arrested in South Armagh in 2014. He is a bricklayer from Jonesborough Co Armagh, originally from Co Monaghan.

The case against the only remaining suspect has collapsed after the evidence provided by a civilian witness last week was called into question.

On August 15th, 1998 a 500lb bomb exploded in Omagh town centre, claiming the lives of 29 people including a woman pregnant with twins.

Mr Daly was charged with the murder of 29 people, explosive offences and on matters connected to a Real IRA car bomb plot in Lisburn on April 3rd 1998.

But in light of the evidence in its current state the test for prosecution is no longer met.

The PPS has taken the decision following apparent inconsistency in evidence provided by Denis O’Connor from Kilkenny in court last week. The key to the case was evidence from Mr O’Connor connecting Mr Daly to a mobile phone that had been used on the day of the Omagh bomb. Previously the PPS had been of the view that there was a reasonable prospect of conviction but after Mr O’Connor conceded that it was possible he confused receiving a call from Mr Daly on the day of the Omagh bomb with a call he had received eight days earlier the case has now collapsed.

It is expected that Mr Daly, who has always denied involvement in the atrocity, will be released from Maghaberry Prison on Tuesday.

A statement from the PPS said: “The decision not to seek the return of Seamus Daly for trial in the Crown Court has been taken following a careful review of the current state of the evidence.

“This has focused in particular on the testimony of a key witness during committal proceedings last week.

“Under cross-examination a number of issues became apparent which impacted upon the reliability of the evidence that a witness was providing.

“Having conducted a careful review of the case with the prosecution team, the Director of Public Prosecutions Barry McGrory QC has concluded that the available evidence no longer provides a reasonable prospect of conviction.

“Consequentially the prosecution cannot be continued.”

The PPS spokesperson extended sympathy to the families affected by the Omagh bomb and reiterated that the test for prosecution is no longer met.

To date no one has been convicted of carrying out the Omagh bomb.

Mr O’Connor had been a witness in the landmark civil action taken by victim’ families which resulted in Michael McKevitt, Colm Murphy, Liam Campbell and Seamus Daly being ordered to pay more than £1.5m in damages.

Michael Gallagher, whose son Aiden was killed in the bomb, was in Ballymena Magistrates’ Court when the decision to drop the case was announced.

“Here we are again after 18 years. Extremely disappointed,” he said afterwards. “We’ve been let down by the police service, by the PPS, by the criminal justice system...And this is probably, or was probably, the last chance for justice.”