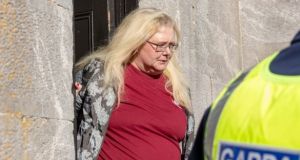 A 48 year old mother of two has been sentenced to life imprisonment after she was found guilty of the murder of her former husband who was found with a total of 28 stab wounds at his home in Co Cork over two years ago.

Rita O’Driscoll from Bridge Street, Bandon, Co Cork had denied both the murder of Timmy Foley (44) and assault causing serious harm to his brother, Jason Foley (43) at Dan Corkery Place in Macroom on October 8th 2018.

At the Central Criminal Court sitting in Cork on Wednesday, the jury of five men and seven women took six hours and 17 minutes, spread over three days, to find O’Driscoll guilty of the murder of Timmy Foley but not guilty of the assault of Jason Foley.

Ms Justice Eileen Creedon sentenced O’Driscoll to the mandatory life sentence for murder backdated to October 10th 2018 when she first went into custody and she extended her sympathies to the Foley family on their loss.

Det Sgt Derek Mulcahy told the court gardaí were alerted at around 1.35am on the day in question when Jason Foley, who had an acquired brain injury, pressed his panic button. Sgt Michael Kelleher, Garda Siobhan O’Dowd and Garda Padraig Dennehy arrived at the scene.

O’Driscoll was outside the house at Dan Corkery Place with two wounds to her left arm and a wound to her forehead while gardaí found Jason Foley lying on top of his brother Timmy surrounded by blood on the floor in the sitting room of the house.

Paramedics arrived and carried out CPR on Timmy Foley but at 3.04am, he was pronounced dead at the scene.

O’Driscoll was arrested on October 10th 2018 and charged with murder.

During the trial, the jury heard evidence from Assistant State Pathologist, Dr Margot Bolster who said she found a total of 28 stab wounds on the body of Timmy Foley which ranged from very superficial ones which were almost like pin pricks to one that was 12 cms deep.

Four were potentially fatal including one to Mr Foley’s carotid artery in his neck as well as others to his right auxiliary vein, right lung and lower liver and the cause of death was haemorrhage and shock due to multiple stab wounds.

Dr Bolster told the court the wounds were consistent with a curved steak knife found hidden in a cistern and the court heard blood found on the knife between the handle and the blade was a majority DNA match for O’Driscoll’s DNA.

O’Driscoll told gardaí at interview that she had stabbed Timmy Foley twice in self defence - once in the head and once behind his shoulder - after she managed to get the knife off him after he attacked her first and she said Jason Foley then attacked his brother, stabbing him repeatedly.

O’Driscoll came from a large Traveller family and had been bullied while at school in West Cork. She had also suffered discrimination because of her ethnicity and had poor coping skills and was very stressed at the time of her discharge from CUH, he said.

He said she reported she had been in an abusive and violent relationship with her former husband, the late Mr Foley and had presented to the emergency department on several occasions with injuries consistent with assault.

“She described herself as a firecracker that was ready to explode,” said Dr Monks, who agreed with prosecution counsel, Siobhan Lankford SC that the defendant showed no signs of active mental illness when interviewed by gardaí.

The Foley family spoke in a victim impact statement of how Timmy Foley’s murder had changed their lives forever.

“As a family, we have been scarred for life, our elderly father cannot accept how his son was taken in such a cruel way … it has taken two long years for us to get justice but no matter what the sentence, we will never have closure.

“We could have been saved all of the agony, all of the suffering and heartache if she (O’Driscoll) had just held her hands up to begin with, rather than pulling our family through the courts to hear how Timmy died in such an inhumane way.”

Following O’Driscoll’s sentencing there were emotional scenes in court when her daughter, Chantal broke down and pleaded with Ms Justice Creedon not to jail her mother. “Please don’t take her away from me and my brother, she has had a hard life, a very hard life and she reared us hard.”

Speaking afterwards O’Driscoll’s sister, Breda said the family would be appealing the conviction.

Later outside the Anglesea Street Courthouse, disturbances erupted between relatives of both the O’Driscoll and the Foley families. Gardaí, including garda dog handlers, had to intervene, with at least one juvenile being arrested for public order offences.