Suspected counterfeit cigarettes would be worth €4.5m in retail terms if genuine 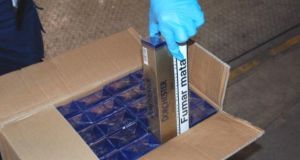 Part of the cigarette haul recovered at Dublin Port on Thursday. The Dorchester brand cigarettes were described on the carrying ship’s manifest as “vacuum cleaners” and are believed to be counterfeit. Photograph: Revenue

Over nine million cigarettes have been seized at Dublin Port as part of an intelligence-led operation carried out with China’s customs authorities.

If genuine, the cigarettes would be worth about €4.5 million at retail value. This shipment is believed to be counterfeit, however.

Revenue’s Customs Service discovered the cigarettes on Thursday in a container which had left China aboard the vessel MV Cosco Fortune.

That vessel sailed via the port of Ningbo in China to Rotterdam in the Netherlands. The cigarettes were transferred before they finally arrived at Dublin Port.

The Dorchester brand cigarettes were described on the ship’s manifest as “vacuum cleaners”.

If the cigarettes were sold on the black market, they could represent a potential loss to the exchequer of €3.8 million.

Investigations into the seizure are continuing.

In a separate operation, five men were arrested and more than four million cigarettes seized along with a suspected mobile fuel laundering plant in Co Tyrone on Thursday.

The seizures and arrests were carried out jointly by the Customs Service, HM Revenue and Customs and the Police Service of Northern Ireland as part of an operation targeting the supply and sale of illegal cigarettes.

Revenue is calling on anyone with information on the smuggling or sale of illegal cigarettes or tobacco to contact them in confidence on free phone 1800 295 295.