Mediation is 'common sense' not a sign of weakness, says Commerical Courts chief 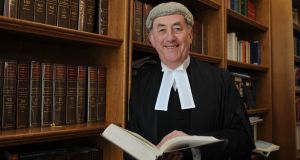 If, 15 years ago, you had assembled a random group of litigation lawyers and asked each of them to speak for a minute on the topic of mediation, you would probably have been met with stony silence. “Or else,” said Mr Justice Peter Kelly at a recent seminar, “you would have met a chancer who was going to wing it.”

If you were to reassemble that group now, the judge continued, you would be shocked if you discovered amongst them somebody who didn’t know about mediation. Many of them would have taken a course to be accredited as mediators. And if somebody in the group admitted to knowing nothing about the topic, he would be advertising himself as a potential target for a professional negligence suit.

Few have been better placed to witness the rise of mediation in Irish business life, or its value as a means of resolving disputes, than Judge Kelly, who has presided over the Commercial Court since its creation in 2004. “People have become more accepting of the idea, and people have become enthusiastic about it,” he told the seminar hosted by the Irish Commercial Mediation Association (ICMA). “Nowadays it’s not regarded as a sign of weakness that one side would suggest mediation – it’s regarded as good common sense.”

What figures exist suggest mediation is a small but increasingly popular means of resolving commercial disputes. A survey carried out by the ICMA this month found there were 133 mediations in Ireland last year, compared to just 18 in 2003. Austin Kenny, the association’s chair, speculates the true figure could be closer to 250-300, but gauging the scale of a process that necessarily takes place below the public radar is difficult.

In Government, moves are afoot to establish the process on a statutory footing. The secretary general of the Department of Public Expenditure and Reform, Robert Watt, told the seminar the Civil Service was working to formalise mediation as a key component of its legal and dispute resolution system.

A mediation Bill being drafted will, according to Watt, make provision for a code of practice for mediators and introduce a statutory requirement for solicitors to inform their clients about the mediation option before beginning court proceedings. It will also provide for the courts to invite parties to consider mediation, including allowing for court proceedings to be adjourned for the period of mediation.

Such practices are already established in the rules of the Commercial Court, where proceedings can be adjourned for up to 28 days to allow parties to explore the option.

Mediation is no panacea. It doesn’t suit every type of dispute, and there will always be people who want their day in court. But the benefits of success are clear.

“The costs are so much less,” said Judge Kelly, a self-professed fan. “The expenditure of time is so much less. The process is so flexible. It’s owned and run by the parties to it, and it can produce results which no court or no arbitrator can produce.”

While mediation is well established in certain types of cases, Judge Kelly suggested there were others, such as medical malpractice litigation, where it could be very useful.

In such cases, plaintiffs were very often seriously ill, and believed their illness was brought about as a result of malpractice by doctors or nurses who themselves were under extreme pressure. The media reportage of such cases was “very unfair”, the judge said, in that journalists tended to report on the early stages, where the plaintiff’s case was at its height, before losing interest.

“The case drags on for four, five or six weeks, and if the doctor is ultimately successful, it might get a column inch, but meanwhile his reputation is in tatters as a result of the reportage in the early part of the case. If the plaintiff loses, that’s devastation upon devastation . . . That is an area of litigation in which mediation can play a hugely important role.”

At the same seminar, the London-based mediator Michel Kallipetis QC made a barrister’s case for mediation. He argued the open session offered lawyers a terrific opportunity – not to hector the other side or convince their opposite number they have it wrong, but to “inculcate in the client who is paying for the litigation the possibility that you may have a better argument than his legal team are telling him.

“That’s all you need to start the process of trying to negotiate a settlement,” he said.