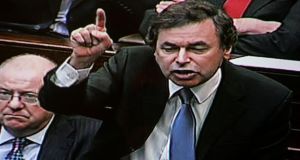 The media would be given access to family law and child care cases under a draft law on court reform published today by Minister for Justice Alan Shatter.

Journalists covering such hearings would be subject to certain restrictions, however, and could face up to three years in prison and a €50,000 fine for breaking rules on anonymity.

The Courts Bill 2013 proposes changing the “in camera” rule, which prevents journalists and other members of the public from being present in court when family law and child care cases are being heard. It would allow “bona fide” representatives of the media access to hearings but would impose a strict ban on the publication of any material which would be likely to lead to the identification of the parties to proceedings.

The “in camera” rule has been widely criticised by people with experience of family law litigation, as well as lawyers and members of the judiciary.

While the long-standing blanket ban on media would be lifted, however, judges would have the power to exclude reporters or restrict their attendance if they were satisfied this was necessary in order to preserve the anonymity of a party to the proceedings or a child, for example, or that it was in the interests of justice.

Mr Shatter said the Bill was designed to strike a balance between greater transparency in family court cases and protecting the anonymity and privacy of families and children. “These reforms are long overdue. Media access and reporting of cases will add transparency to the conduct of family law and child care proceedings and will provide valuable information on the operation of the law in this area,” he said.

The Government hopes the move will ultimately lead to a reduction in legal costs for individuals and companies and ease pressure on the higher courts.

It argues that the extension in the jurisdiction of the District and Circuit Courts would reduce the proportion of litigation currently being dealt with by the High Court. Over time, this should lead to a fall in the number of appeals that have to be dealt with by the Supreme Court, where waiting times are currently running at up to four years.

In an attempt to deal with concerns about possible inflation of awards – and a consequent effect on insurance costs – Mr Shatter is also proposing to restrict the jurisdiction of the Circuit Court to €60,000 for personal injury actions.

The Law Society welcomed the proposed changes to the “in camera” rule and court jurisdictions but said it was concerned that the District and Circuit Courts would not have enough resources to deal with the pressure of the heavier workload. “It will be essential that additional judges be appointed and other resources put in place to ensure that access to justice doesn’t suffer as a result of this,” said the society’s director general, Ken Murphy.

A spokeswoman for Mr Shatter said his objective was to have the Courts Bill enacted before the summer break.