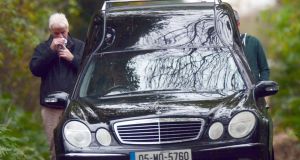 The bodies of Kitty and Tom Fitzgerald are removed from their home, accompanied by Tom’s brother Vincent. Photograph: Paul Mealey

The results of postmortem examinations on the bodies of Co Mayo couple Tom and Kitty Fitzgerald who were found dead at their home on Tuesday indicate murder/suicide.

Although there has been no official statement by gardaí on the findings of the double autopsy, it is understood they rule out the couple’s son, Paul, as a suspect in the tragedy.

Paul was discovered with serious head injuries at the family home in Knockadoon, Irishtown, close to the Mayo/Galway border, at around 3pm on Tuesday.

The remains of his father Tom (75) lay in the farmyard area, while those of his mother Kitty (72) were inside the house.

Paul Fitzgerald, a painter and decorator like his father, was rushed to University Hospital Galway and later taken to Dublin’s Beaumont Hospital where he is said to be showing signs of improvement.

On Friday, in the wake of autopsies on the dead couple carried out at Mayo University Hospital in Castlebar, gardaí weren’t commenting on the pathology results.

Unofficially, however, it is understood the investigation team have a much clearer picture of how and when the tragedy unfolded and have ruled out any criminal involvement on the part of Paul Fitzgerald.

Toxicology tests on the remains have been part of the investigation. The completion of the autopsies by Deputy State Pathologist Dr Michael Curtis cleared the way for the release of the bodies to relatives.

There is no indication of when the funerals will take place. Explaining the delay, one relative said on Friday they were hoping to hold back on the funerals until Paul is fit to attend, if that is feasible.