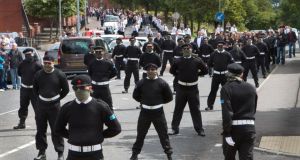 He died in May 1981 after 61 days on hunger strike in Long Kesh prison. He was a member of the INLA at the time.

A number of searches have been carried out by the PSNI in Derry and items believed to be linked to masked men present at Saturday’s funeral of the 88-year-old Mrs O’Hara have been seized.

Unionist and nationalist politicians joined in condemning the presence of dozens of masked men dressed in paramilitary uniforms at the burial in the dead woman’s native city.

The men were dressed in matching uniforms of black trousers and black jumpers, all with white belts, white shirts, black berets, sunglasses and army green scarves covering the lower part of their faces.

Sinn Féin’s Martin McGuinness confirmed he was at the funeral, adding he was “honoured to attend”. However, he said the presence of “masked men parading . . . did little to respect the memory of such a good woman”.

In the days before the funeral, the DUP led demands for assurances from the PSNI that no paramilitary trappings would be tolerated.

Those calls came after video emerged late last week in which masked men were seen firing shots apparently in tribute to Mrs O’Hara.

Derry and Strabane independent republican councillor Gary Donnelly said he was present when the shots were fired and defended what had happened.

“A number of armed and masked men paid tribute to Peggy by firing shots over her coffin,” he said.

“They were fired into the air and there was nothing hostile about it.”

The DUP’s East Londonderry MP Gregory Campbell criticised the policing operation on Saturday, saying there were “no visible signs” of a PSNI presence close to the cortege.

“Men and women dressed in paramilitary garb with faces covered were free to march, for almost two miles, around the streets of Londonderry.”