Man to appear in court charged over Dublin stabbing 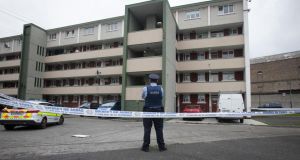 Members of the Gardai at the scene of a serious assault at a flat complex in School Street, Dublin. Photograph: Collins

A man is to appear in court today charged in connection with the stabbing of a woman in Dublin 8 yesterday morning.

The man, who is understood to have presented himself to gardaí shortly after the attack on School Street, is wanted for murder in Thailand. He was charged with assault causing harm in connection with the Dublin incident this morning.

The 48-year-old victim suffered life-threatening stab wounds after being attacked by an assailant who was apparently waiting for her in the stairwell of a flats complex.

Garda sources said the injured woman was initially not expected to survive. However, she has since undergone surgery and her condition appears to have stabilised, though she remains seriously ill.

A former member of the Defence Force, the suspect left Ireland more than 10 years ago after receiving compensation for hearing impairment while serving in the Army.

Having settled in Pattaya, he was arrested eight years ago and charged with the murder of a young local prostitute who was stabbed to death in the Dubliner’s apartment.

A former taxi driver in Ireland, he was arrested the day after the murder on his way to the Cambodian border.

A man he paid to drive him to Cambodia recognised him from his photograph in local news reports and arranged to meet police at a service station along the route.

However, while charged with murder he was granted bail after surrendering €30,000 and then left Thailand. He has since evaded the authorities there.

He is believed to have only returned to Ireland in recent months.

Gardaí investigating the stabbing say the suspect was known to his victim. Both were originally from the same part of Dublin’s south inner city.

The victim had just left her home in the complex and was making her way to work in a local crèche and community centre a short distance away. She was stabbed repeatedly in the upper body and lost a large quantity of blood. The emergency services were alerted and she was treated at the scene by paramedics before being taken by ambulance to St James Hospital.

The Irish Times understands the suspect presented himself to gardaí at Mountjoy station on Dublin’s North Circular Road shortly after the attack.

He was arrested under Section 4 of the Criminal Justice Act and can been detained for up to 24 hours without charge and brought to Kevin Street Garda station.

The scene where the stabbing occurred was sealed off by gardaí and has since undergone an examination by members of the Garda Technical Bureau.

The investigation is being run from Kevin St garda station, where the suspect was brought after surrendering himself.

The victim has not been in a position to be interviewed about her ordeal.

Her account of the attack could significantly aid the investigation, though it was unclear when she might be well enough to be interviewed by gardaí.