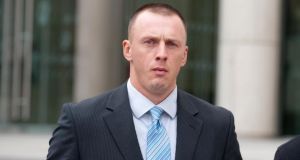 A 32-year-old manhas been sentenced to six years for stabbing a man to death in his Tipperary home on St Stephen’s day.

Gintaras Brazauskas (29) died in the early hours of St Stephen’s Day 2008, after sustaining seven stab wounds, two of which were fatal.

Egidijus Kiaulakis of Coille Bheithe in Nenagh, a father of one, admitted stabbing the deceased but said he acted in self-defence.

Kiaulakis had pleaded not guilty to murdering Mr Brazauskas at a trial in March. The jury found him guilty of manslaughter.

He was also found guilty of assault causing harm to a friend of the deceased Robertas Sujetovas on the same occasion, a charge he denied.

At the Central Criminal Court today Mr Justice Paul Carney sentenced Kiaulakis to six years for the manslaughter and four years for the assault with the two to run terms concurrently.

Mr Justice Carney said he was taking account of the fact that he equipped himself in advance with a knife, the number of stab wounds and the effect on the injured party’s wife and family. He also took account of his plea to manslaughter, his work history.

The judge also said “I take account of the leniency that is afforded to foreign prisoners serving sentences in Irish jails”.

Last week, the deceased’s fiancée, Sandra Valaityte, testified that the defendant had ruined her life and that of her child.

In her victim impact statement she said she had slept with the light on since the killing four-and-a-half years ago and that every noise she heard scared her. She said that she still had nightmares and must take medication to help her sleep. “My family and friends are afraid to leave me,” she said.

Ms Valaityte said that she and Mr Brazauskas were due to get married on April 23rd, 2009. They had been in a relationship since she was 15 and their baby was only a couple of months old when his father was killed.

She said that, as well as providing for his young family, the victim used to send money to his father, who was confined to a wheelchair. She said that his mother had been on anti-depressants since the killing. “We were having a lovely Christmas until this man came into our house and ruined my life and my child’s life,” she said.

The two victims were lifelong friends from the same town in Lithuania. They had celebrated Christmas Day with family and friends in Mr Brazauskas’s flat, which was downstairs from Mr Sujetovas’s flat in a house in Summerhill, Nenagh.

Shortly after midnight, the defendant left his home with a bottle of brandy looking for company. As he passed the house in Summerhill, witnesses said he threw stones at the window of the victim’s flat.

Mr Sujetovas told the trial that he wasn’t a friend of the group, but they knew him as a fellow Lithuanian and allowed him in. Ms Valaityte soon asked him to leave as the noise was upsetting their two-month-old baby.

Mr Sujetovas and another man left with him and a fight broke out, with this other man breaking a bottle over the defendant’s head. The defendant went to a friend’s house covered in blood, telling him he wanted to find out why he had been attacked. The friend returned to Summerhill with him, not knowing the accused had taken a knife from his kitchen.

Another fight broke out when they arrived at the flat, with the accused stabbing the deceased seven times and stabbing Mr Sujetovas four times. Mr Brazauskas died at the scene. Mr Sujetovas was rushed to hospital and made a full recovery.

The accused left with his friend, discarding the knife in a nearby churchyard. He was found semi-conscious later that morning in a ditch several kilometres away.