Man refused to give blood sample to black doctor 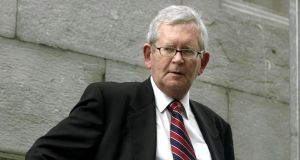 Judge Carroll Moran: said John McNamara’s reasons for not providing a sample to the doctor were “quite objectionable” and he upheld the four-year ban and a fine of €2,500 imposed on McNamara in the District Court.


An east Clare farmer has been banned from driving for four years after refusing to provide a blood specimen because the doctor designated to take the sample was black.

At Ennis Circuit Court, Judge Carroll Moran said he was “really appalled by John McNamara’s conduct and attitude towards the doctor concerned”. Judge Moran said McNamara’s reasons for not providing a sample to the doctor were “quite objectionable” and he upheld the four-year ban and a fine of €2,500 imposed on McNamara in the District Court.

In evidence yesterday during an appeal by McNamara against his District Court conviction, Garda Jarlath Hardiman said McNamara, of Raheenabeg, Killaloe, was brought to Killaloe Garda station on suspicion of drink-driving on the night of August 19th, 2012.

Garda station
He said that when a Sudanese doctor, Dr Awadilla Abdelrrazig, arrived at the station to take a blood sample, McNamara said: “I’m not letting that black doctor near me. I’m not letting him do anything to me.”

He said that McNamara allowed Dr Abdelrrazig apply a tourniquet to his arm to take blood and efforts were made to draw blood with a needle, but McNamara was restless in the chair, resulting in Dr Abdelrrazig not being able to take a sample. In evidence, Dr Abdelrrazig said McNamara “was making inappropriate comments to me and said that he wasn’t giving blood to a black doctor. He also said that he doubted that I was a doctor”.

Counsel for McNamara, who is in his 50s and divorced, told Dr Abdelrrazig his client “wishes to apologise to you, and what he said to you on the night he deeply regrets”.