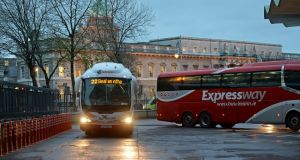 A man has been jailed after trying to transport 1.6kg of high-grade explosives and three detonators on the Bus Éireann bus from Dublin to Derry. File photograph: Eric Luke/The Irish Times

A man who was arrested while trying to transport 1.6kg of high-grade explosives and three detonators on the Bus Éireann bus from Dublin to Derry has been jailed for seven years by the Special Criminal Court.

The court heard Busáras had to be evacuated after detectives intercepted Patrick Brennan on board the bus at the Dublin station on June 16th, 2016.

Brennan (53) was arrested by officers from the Special Detective Unit (SDU) at Busárasfollowing a tip-off.

Brennan, of Lindisfarne Avenue, Clondalkin, Co Dublin, had pleaded guilty in January to possessing four 400g blocks of TNT and three electric explosive detonators on the date in question.

Det Sgt Padraig Boyce of the SDU told the court that Brennan had been under surveillance “as part of an ongoing investigation” into the activities of IRA members in the Dublin area.

Mr Boyce said that, on the day of the arrest, Brennan was observed leaving his house at about 4.50am before immediately getting into a taxi.

The taxi took Brennan to Busáras, where he waited for about 50 minutes before boarding Bus Éireann’s 5.55am service to Derry, the three-judge court was told.

At all times, Brennan had a blue canvas bag in his possession.

This bag was placed in the seat next to him when he was subsequently arrested aboard the bus by three SDU officers.

He said: “In the base of the bag there were four blocks of Trinitrotoluene, commonly known as TNT, and three electronic detonators in good condition strapped to the TNT.”

After the explosives were discovered, “the surrounding area was evacuated and the Army was called”, Mr Boyce said.

Brennan, who had been jailed for four years in 2005 for IRA membership, was the sole passenger on the bus at the time of his arrest, Mr Boyce said.

He said that he believed the quantity of explosives could have been used to construct “six to eight” separate car bombs.

Although the explosives were not armed, Mr Boyce said the TNT had been “lethally packaged” and could have been detonated by a “static charge” when being moved.

Sentencing him to seven-years’ imprisonment backdated to last June, Mr Justice Tony Hunt, presiding, said that while Brennan’s role was confined to transportation, acting as a willing courier was the same as taking part in terrorist activities.

The judge said that the court was prepared to suspend the final two years of the sentence if Brennan gave an undertaking to not associate with members of unlawful organisations.

However, after a brief consultation, Brennan’s counsel, Diarmaid Mac Guinness SC, said his client was not in a position to give such an undertaking.

The court then imposed the full seven-years’ prison sentence.

1 Bobby Storey: The IRA's planner and enforcer who stayed in the shadows
2 Is Donald Trump losing his touch?
3 Unflappable ‘Dr Tony’ became public face of Covid-19 crisis response
4 Q&A: How close are we to having a Covid-19 vaccine?
5 Transgender Cork farmer (65) surprised at positive response to telling her story
Real news has value SUBSCRIBE