Man in court over attempted murder of prison officer 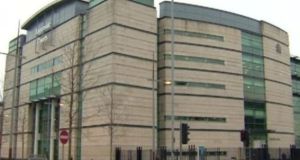 A west Belfast man was remanded into custody today on Sunday accused of trying to kill a prison officer.

Christopher Alphonsos Robinson (45), refused to stand or confirm that he understood the two charges against him and instead yawning loudly at the Belfast Magistrates Court.

A bomb was placed under the van of a 52-year-old married father-of-three in Hillsborough Drive in east Belfast last Friday morning and left him requiring surgery for leg injuries.

The public gallery of the court was filled with Robinson’s family and supporters, surrounded by ten police officers from the Tactical a support group and many more outside the actual courtroom.

Robinson, from Aspen Park in Dunmurry, is accused of possessing an under vehicle improvised explosive device with intent to endanger life and attempting to murder a prison officer whose name is Joe the subject of a judge imposed reporting restriction.

The prosecution lawyer said they was seeking the restriction as police believe the life of the victim is still under threat.

While Robinson’s defence solicitor said he was not applying for bail, he claimed that during 16 police interviews, “no evidence was actually put” which alleged he either placed the bomb under the car or possessed the IED at any stage.

The solicitor further claimed the only evidence linking Robinson to the murderous attack was the statement of a co-accused who did not actually name Robinson.

As there was no bail application, District Judge Harry McKibben remanded Robinson into custody to appear again on 1 April.

As he was lead to the cells, the friends and supporters including prominent dissident republican Dee Fennell clapped and cheered.