Man dies of head injuries after attack in south Dublin 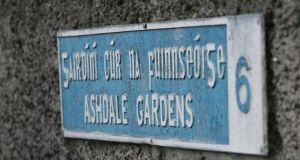 The scene at Ashdale Gardens has been preserved pending a forensic and technical examination.

Gardaí believe a man who died from head injuries sustained in a flat in south Dublin yesterday, was attacked by one of two other men he had spent the day drinking with and watching the rugby international between Ireland and Wales.

The victim, who was in his 60s, has been named as Cathal Sweeney, who was a well-known member of the St Mary’s Rugby Club.

He was drinking with two other men in his flat at Ashdale Gardens, Terenure, south Dublin, when he sustained what proved to be fatal head injuries during an attack just after 5.30pm.

The emergency services were called and gardai and paramedics arrived at the property just before 6pm.

It is understood gardai received a number of emergency calls, including from neighbours who reported hearing fighting and shouting coming from the flat.

The victim was treated at the scene and was then taken by ambulance to St James Hospital.

However, despite efforts to save him, he died from his head injuries shortly after arrival at the hospital.

Gardaí investigating the death have spoken to the two men who were at the scene when Mr Sweeney was attacked and one of those men has been arrested on suspicion of fatally attacking Mr Sweeney.

The suspect, who is in his 30s, was at the scene in Terenure when gardai arrived yesterday evening.

He was arrested there under section 4 of the Criminal Justice Act. He is being questioned at Terenure Garda station when he can be questioned for up to 24 hours without charge.

The arrested man is of no fixed abode, is regarded as a heavy drinker and has a large number of convictions formostly alcohol related crimes, including public order.

The scene of the killing was sealed off overnight and Mr Sweeney’s body remained there until this morning when a pathologist carried out a preliminary examination.

The body was then taken from the flat for a full post mortem, which has not yet been concluded.

The flat where Mr Sweeney was killed has undergone a forensic examination by members of the Garda Technical Bureau.

The killing was being treated this afternoon as a suspicious death, though it is expected to be upgraded to murder when the results of the post mortem become available, Gardai in Terenure are investigating.