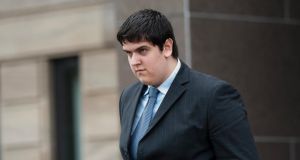 Alexander Pacteau is charged with the murder of Karen Buckley. Pic by Mike Gibbons/Spindrift

A 21-year-old man was charged with the murder of Irish nurse Karen Buckley at Glasgow Sheriff Court on Friday afternoon.

Alexander Pacteau, from the city’s west end, made no plea or declaration and was remanded in custody by Sheriff Kenneth Hogg.

Mr Pacteau’s appearance at court number three for a full committal hearing was held in camera, in accordance with Scottish law, without any media or members of the public present.

The date of Mr Pacteau’s next court appearance has not been set but he is expected to stand trial later this year.

According to reports in local media, papers obtained from Glasgow Sheriff Court claim that on April 12th at his Dorchester Avenue flat and elsewhere, he repeatedly hit Ms Buckley on the head with a spanner or similar object.

Mr Pacteau faces a second charge that between April 12th and 13th at his west end flat and at High Craigton Farm, Drymen, knowing he had killed Ms Buckley, he “applied corrosive substances” to her body.

Mr Pacteau was seen with Ms Buckley, a nursing student from Co Cork, outside the Sanctuary nightclub in Glasgow at about 1am on Sunday, April 12th.

Ms Buckley’s disappearance sparked a major search operation that led to the discovery of her body at High Craigton Farm on the city’s outskirts.

On Friday, April 17th, the day after that discovery, Mr Pacteau was charged with murder and attempting to defeat the ends of justice at Glasgow Sheriff Court.

Under Scottish Law, the next step after Friday’s full committal hearing is the preliminary hearing.

An indictment must be served within 80 days of Friday’s hearing.

In all, the Crown has 12 months from the accused’s first appearance before the court to begin a trial in the High Court, where most Scottish murder cases are heard.

If the prosecution does not begin within this time frame, the accused must be released on bail.

As under Irish law, in Scotland a person accused of murder can request to have a second postmortem carried out on the body of a homicide victim by their own pathologist.

Lawyers for Mr Pacteau indicated that their client wished to have an independent autopsy carried out.

The second postmortem is expected to be conducted on Friday.

The Crown Office and Procurator Fiscal Service declined to comment on when Ms Buckley’s body would be released to her family for burial.