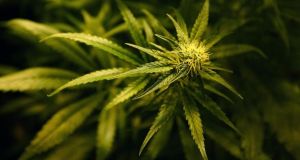 Man remanded in custody after he was charged in connection with the discovery of an underground bunker in Co Cork where gardaí discovered a cannabis growhouse with € 100,000 worth of plants.

A 31-year-old man has been remanded in custody after he was charged in connection with the discovery of an underground bunker in Co Cork where gardaí discovered a cannabis growhouse with € 100,000 worth of plants.

Adas Bacovas, a Lithuanian national, was brought before a special sitting of Bandon District Court last night and charged with cultivation of cannabis at Dereenalling, Ballyvourney, Co Cork on April 24th.

Det Garda Padraig Sleator gave evidence of arrest, charge and caution and told the court that Mr Bacovas made no reply to the charge when it was put to him after caution.

Supt Liam Horgan said that gardaí were seeking a remand in custody and defence solicitor, Sean Cahill said his client was not making any bail application at this time.

Judge James McNulty granted the state application and remanded Mr Bacovas in custody to appear again at Macroom District Court on May 1st.

Judge McNulty also granted Mr Bacovas free legal aid after being informed by Mr Cahill that he had been in the country since January but had no assets nor was he in receipt of any state assistance and was in effect destitute.

Two other Lithuanians arrested by gardaí as part of the same investigation into the growhouse operation at Ballyvourney were released without charge and a file will be prepared in respect of them for the DPP.