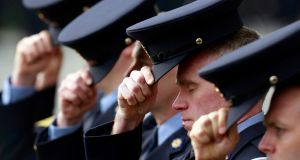 The “overwhelming majority” of Irish people and Garda members do not want an armed police force in the Republic, the former Garda Inspectorate head Kathleen O’Toole has said.

Ms O’Toole, now the chief of police in Seattle in the United States, said it was important any reforms of Irish policing were “culture-proofed”. She said what worked in the US would not necessarily be beneficial for Ireland.

The debate around arming the Garda had intensified in the wake of the murder of Garda Tony Golden earlier this month.

“When I first went to Ireland people said to me, ‘Well, you’re from America, I’m sure you’ll want to arm all the gardaí’,” said Ms O’Toole, who was head of the Garda Inspectorate from its inception in 2006 until 2012.

She was the first female commissioner of Boston Police before coming to Ireland to lead the Inspectorate, which reviews Garda policy and practices and recommends to Government where reforms in policing were needed.

“It’s great to look internationally and look for best practices elsewhere but we really need to culture-proof them for the jurisdiction,” Ms O’Toole told RTÉ’s This Week programme.

“And the overwhelming consensus was that they did not want routinely armed police. What they did want was an enhancement in officer safety,” she said.

The Inspectorate had, as a result, advocated for additional kit for individual gardaí such as stab-proof vests and pepper spray.

The units wear combat-style Garda uniforms and have specialist vehicles. Initially their firearms were securely locked away until an armed response scenario, such as a siege, occurred. Members are now permanently armed.

Aside from the RSUs, all Garda detectives are licensed to carry firearms as are a range of specialist Garda units.

In a force with a full strength just below 13,000, about 3,000 members are licensed to carry firearms. The force has in recent years also invested in less-than lethal weapons such as stun guns.

Ms O’Toole said she was not surprised when a report by the Garda Inspectorate last year identified serious shortcomings in how the force investigated crime.

“I wasn’t surprised because we had uncovered some concerns when we did the work on the child sexual abuse cases,” she said, adding that she expected Commissioner Nóirín O’Sullivan will “step up” and bring about improvements.