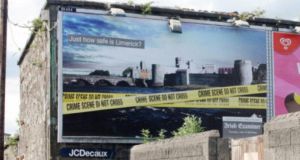 A second Irish Examiner poster, erected in Limerick after the first was torn down. Picture: Mike Cowhey

There have protests in Limerick and Kerry over a billboard advertising campaign promoting the Irish Examiner which has prompted more than 20 complaints to the Advertising Standards Authority.

The advertisements feature pictures of familiar tourist spots across Munster in which the images have been adorned with Garda crime scene tape. The images are promoting a series in the newspaper on crime in a range of locations across the State. The articles are due to run later this month.

However Limerick council and a group representing Kerry hoteliers are not happy, claiming that efforts to promote tourism are being undermined by the billboards which portray their localities as hotspots of crime rather than attractive destinations.

Irish Examiner editor Tim Vaughan is defending the campaign and claims it has been misunderstood, especially in Limerick where there has been a strong reaction to it, with many people feeling their city has been unfairly tarnished as a crime capital. One billboard bearing the Examiner’s advertisement has been vandalised and it is not anticipated that the image will be replaced.

Mayor Gerry McLoughlin has written to the Examiner claiming the campaign is “irresponsible” and “alarmist” and calling for the advertisements to be taken down and replaced by images which proclaim that Limerick and the other tourist sites “are safe places to do business, work in, visit and live in”.

He added: “In a time where we need increased revenue to assist business and promote tourism, any cheap, negative and damaging slogans should not be permitted in Limerick.” Approaches are also being made to Shannon Development which owns the photograph used, he said.

Some of the dozens of complaints on social media are incensed that the advertisement bears the line “Just how safe is Limerick?” and the Garda tape with the words “Crime scene – do not pass”.

The billboard advert, placed outside the city’s Colbert rail station was destroyed shortly after it was put up. The Examiner says it will not be replaced.

Laura Ryan, head of communications with Limerick council, said she had written to the Examiner.

“My gripe is the shock tactics the Examiner have chosen to “sell” this story and the positioning of a screaming ill-advised billboard at Colbert Station, one of the main entry points into the city for visitors and tourists to Limerick,” she said.

“How can you honestly believe that frustrating and irritating Limerick’s business community, its hoteliers, the citizens of Limerick and frightening tourists will sell more newspapers in this city?

“I’m particularly annoyed that an image of King John’s Castle is used just weeks before the re-opening of one of Limerick city’s biggest tourist attractions which has just undergone a massive €6 million refurbishment.”

The Advertising Standards Authority confirmed more than 20 complaints are being dealt with. Chief executive Frank Goodman said the case would be examined under strict guidelines and assessed before any action is decided.