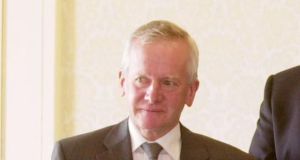 Retired High Court judge Barry White needs to return to work as a barrister “due to economic necessity” but is being blocked by the barristers’ representative group, the High Court has been told.

Mr White (71), who retired last year after a 12-year judicial career in which he presided over some of Ireland’s most high-profile murder trials, has begun legal action against the Bar Council and the Minister for Justice in his attempt to return to practice as a barrister.

The court heard he wrote to the Bar Council, which represents and regulates barristers, asking to be readmitted as a member of the law library. He wrote his request was driven by “economic necessity”, adding he had two children at university and two at secondary school, “with all that entails”.

The council refused his application, citing a rule based on an 85-year-old Supreme Court decision which the organisation says prevents retired judges acting as barristers in a court equal to or less than the court in which they were a judge.

That would mean Mr White could only represent clients in the Supreme Court or the Court of Appeal.

Mr White became a High Court judge in 2002 after 35 years as a barrister, and presided over high-profile trials including that of Eamonn Lillis, convicted of the manslaughter of his wife Celine, and Joe O’Reilly, serving a life sentence for the murder of his wife Rachel.

John Rogers SC, for Mr White, said the ex-judge had practised in the criminal trial courts, which were dominated by reliance on the criminal legal aid scheme.

He said Mr White wrote to the Minister for Justice effectively asking to be placed on the criminal legal aid panel, but was told a barrister could only be placed on it if subject to regulation by the Bar Council.

Mr Rogers, appearing with Cian Ferriter SC, said the Bar Council rule breached Mr White’s constitutional rights, including his right to work and earn a livelihood. He also claimed the rule was anti-competitive and disproportionate, and raised questions about the monopoly position of the Bar Council.

Mr Justice Séamus Noonan said Mr White had an arguable case for judicial review. A hearing date will be fixed at a later stage.