Legal executives step up their campaign for recognition 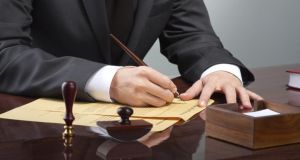 Some 600 members of the Irish Institute of Legal Executives are seeking statutory formalisation of their role. On right, Patrick Courtney of the IILE (top) and Minister Alan Shatter

Ireland’s legal executives are seeking a statutory formalisation of their role in the judicial system, although with the Minister for Justice, Alan Shatter, opposed to including them in forthcoming legislation, it appears they still have a long road to travel.

There are some 600 members of the Irish Institute of Legal Executives, the body agitating for a similar status afforded to their UK counterparts.

Legal executives are not lawyers. Rather, they are assistants whose role often includes the execution of basic functions in the courts, at least in Dublin.

They have legal qualifications but are not members of the Law Library or of King’s Inns.

In spite of that, the Institute believes that by securing statutory recognition its practitioners will be given a type of status that has so far evaded them; the knock-on effects would be the potential for cost-effective, basic legal services and parity with executives around the country whose powers fall short of those de facto in the capital.

“We feel that there is a tier of the legal system being left out. We are the third tier; there are barristers, solicitors and legal executives and we are being excluded,” says Patrick Courtney, president of the institute’s central council.

The institute, with some political support, would like to be formalised in the pending Legal Services Regulation Bill but the Minister has firmly and consistently ruled this out.

According to Courtney, executives in Dublin have over the years assumed the informal ability to carry our various functions: to fix and adjourn court dates, to rule on settlements and to challenge jury selections. They are also involved in conveyancy.

“If there was formal recognition then legal executives could use the same powers in rural areas that they do in Dublin. We are looking for parity in Dublin and in other areas around the country,” says Courtney.

Another benefit of being granted a firmer footing is that the public could avail of cheaper basic legal services, he says. This, the argument goes, would fall in line with the Troika’s desire to see a reduction in such costs.

But there is little expectation of any immediate change and so the Institute is ploughing ahead with its campaign to raise awareness at a public and political level, amplified by debate surrounding the forthcoming bill.

“I don’t think Minister Shatter is going to move to help us with this,” says Courtney.

Addressing the Oireachtas Committee on Justice, Defence and Equality last month, the Minister said it was not about preserving anyone’s patch, but he admitted reservations.

“How does one ensure a member of the public, if he or she approaches someone who is a legal executive rather than a barrister or a solicitor, has knowledge of the level of expertise of the individual with whom he or she is dealing?” he asked the committee.

“As a practising lawyer for many years, these are issues around which I have some concerns.”

In separate responses to parliamentary questions, he has said that this is a matter for another day.

“It must be acknowledged that while legal executives have a range of recognised functions, they are not a homogenous group and tend to provide support in discrete areas of legal practice,” he said, listing conveyancing, probate, commercial and family proceedings.

“It is clear from the correspondence I have received from the Irish Institute of Legal Executives Ltd that the scope of their proposals to confer legal status and a whole range of functions on such a category of persons is extensive and goes way beyond their current functions.”

He was referring to a right of audience in the District and Circuit Courts, before tribunals and, subject to review, subsequently in all courts, a status that would carry with it the authority to directly address a judge.

The Minister also expressed concerns that this placing of executives’ authority on a firmer footing would allow them seek judicial or quasi-judicial appointments, whether to district courts or tribunals.

In response, Courtney says: “I think that Minister Shatter thinks that if he gives us any form of recognition that next we will want to be district court judges or coroners as they have done in the UK.”

This is not an urgent desire but ultimately one that could not be ruled out.

Here, the Minister cautions against any ambition of the Institute that seems modelled on similar developments across the Irish Sea, a structure he says bears “separate and very distinct histories and do not always correspond to those of our jurisdiction”.

The Minister went on: “While recognising that there may be additional benefits and efficiencies to be found for consumers and for the legal services sector in a more developed role for ‘legal executives’ in the future, the very far-reaching proposals being made on their behalf at this time lie beyond the scope of the Legal Services Regulation Bill, impinging, as they do, on aspects of the courts and the judiciary.”