Gardaí right to cite low 2015 murder rate but it has exploded this year, writes Conor Lally 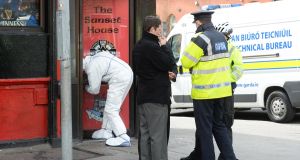 Gardaí at the scene of the shooting of Michael Barr at the Sunset House pub on Summerhill in Dublin where forensic tests were being carried out on Tuesday morning. Photograph: Cyril Byrne/The Irish Times

When the Kinahan-Hutch feud exploded on to the streets of Dublin in February, Garda Commissioner Noirín O’Sullivan was quick to remind people that Ireland’s criminal underworld had calmed considerably in recent years.

She said perspective was needed and pointed out there were just three gang-related murders in 2015.

In 2004, when Michael McDowell was minister for justice he claimed the murder of Dubliner Paul Cunningham in Mulhuddart was the “last sting of a dying wasp”.

No sooner had the words come out of his mouth than a fresh round of relentless feuding broke out, forcing him to eat his words.

At the time he was right though. The wasp remarks related to the fatal shootings and other serious attacks within the group of criminals that collectively became known as the Westies, who were based around Blanchardstown and the surrounding areas.

At the time the key figures in the group had all been killed or were on the run. And if Cunningham’s murder was not the very last sting from the Westies tail, it was certainly close to it.

But in the frenzy of reporting on the subsequent fatal attacks, it was forgotten that McDowell’s remarks related to the Westies. And every time somebody else was shot - in any part of the country and for whatever reason - McDowell was served up his quote as the proverbial humble pie.

Similarly now, the recent outbreak of serious gun violence, mainly in Dublin, does not disprove O’Sullivan’s assertion that fatal gang shootings plummeted last year. But every time somebody else is shot, the murder will be presented as a challenge to the assertion from Garda HQ that things are getting calmer.

The murder of two people in Dublin on Monday night represents the continuation of a very bloody period since the start of the year.

And while the number of people, now seven, who have been shot dead since the year began is by no means unprecedented, one feud accounts for almost of them: the Kinahan-Hutch dispute.

And it appears to be the Kinahan side that has launched a sustained assault the Hutch side rather than it being an eye-for-an-eye or tit for tat scenario.

The feud began last September in southern Spain when Gary Hutch - a 34-year-old from Dublin’s north inner city - was shot dead by the Kinahan gang which he was once a member of.

It accused him of being a Garda informer and despite his family back in Dublin - including his uncle Gerry Hutch, known as ‘the Monk’ - paying the Kinahan side money in the apparent belief Gary Hutch would be spared, he was shot anyway.

In February, Gary Hutch’s associates stormed into a boxing tournament weigh-in at the Regency Hotel in Dublin and shot dead Kinahan gang member David Byrne. Their main target was a member of the Kinahan family who was present but escaped uninjured.

Since then, the Kinahan side has hit back at the Hutch side; killing Eddie Hutch three days after Byrne’s murder and shooting dead Hutch family associate Noel Duggan at his home in Ratoath, Co Meath last month.

Duggan was a close friend to Gerry Hutch, who is the uncle and brother of Gary and Eddie Hutch respectively.

Two weeks ago Martin O’Rourke (24) was shot dead outside Noctor’s Pub on Sheriff Street in the north inner city. He was killed in a case of mistaken identity by a gunman apparently looking to shoot a Hutch associate.

And the murder at the Sunset House last night of Michael Barr (35) is the latest killing in the feud.

He was linked to the Hutch crew and was a dissident republican previously acquitted of Real IRA membership. It appears he may not have been the primary target of the killer and that the murderer expected to find a Hutch family member in the pub on Summerhill Parade in Dublin 1.

The Kinahan-Hutch feud aside, Thomas Farnan (37) was shot dead at his home in Clondalkin just before midnight last night. And while his killing came just hours after Barr’s murder, the two attacks are not linked.

Farnan was a petty criminal who had not been charged with any criminal offence for 15 years and gardaí believe he was most likely killed as part of a localised dispute.

And on February 29th dissident Republic Vincent Ryan - the brother of murdered Real IRA key figure in Dublin Alan Ryan - was shot dead in Finglas Dublin, apparently by the same people who shot dead his brother because of extortion demands placed on them.