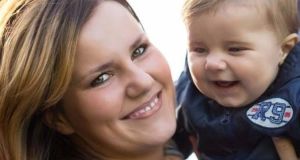 About 500 people including the mother of an 11-month boy found dead in an apartment on Sunday have attended a special Mass on Tuesday in memory of him at Killarney’s St Mary’s Cathedral.

Baby Karol Rozycki, who lived with his mother Anna Rozycka and father Andrzez Piolunowicz, had brought the Polish and Irish communities together, said Fr Piotr Delimat, the Polish chaplain serving the Diocese of Kerry.

The child is to be buried in Poland, but in some way a part of him would always remain in Killarney, he told the congregation of Polish and Irish.

“It doesn’t matter where we are from - we all love our children,” Fr Delimat told the large attendance.

Gardaí involved in the investigation, among them members who responded to an emergency call in the case, as well as Polish members of the investigating team, attended the Mass.

Staff from the Aghadoe Heights hotel where the boy’s mother works, and numerous young families and their children, both Irish and Polish, attended.

Fr Kieran O’Brien, parish priest of Killarney, said the prayers and thoughts of the community were with Anna Rozycka and her family on this sad occasion for the Polish community in Killarney.

She was very grateful for all the support she had received from her work colleagues, gardaí, the Park Place Apartment owners and the wider community, the priest said.

“I am sure that baby Karol will continue to be their strength at this time... that he will heal their broken hearts and comfort them today, and always,” Fr O’Brien said.

The Mass, celebrated and sung in Polish and English, was concelebrated also by Fr Pat Crean Lynch, attached to Ballymacelligott near Tralee.

Symbols of Karol’s life - a picture, flowers and his candles, were carried to a special table in front of the altar altar by relatives and friends.

The procession included the child’s mother Ms Rozycka and her mother Tereasa. Lighting the candle to her son before the family took their seats at the front of the congregations, the mother was greeted and blessed at the altar by Fr Delimat.

An image of the Divine Mercy from Kraków cathedral was on the altar - it has been circulating in Polish homes in Killarney in recent weeks and will be placed in the home of the bereaved family to comfort them, the priest said.

Readings were from the book of Lamentations.

A friend of the family spoke at the end of the service in English and Polish to thank everyone, include the interpreters.

“We believe it is hard for everyone,” he said through tears.

The family and friends could not go through it without the support of the community and work colleagues, he said.

In his short life, Karol had brought huge happiness to the family and friends - much more perhaps than a person who lived a lot longer might, he added.

Announcing that the child would be buried in Poland at his mother’s home town of Bielsko-Biala, near Krakow, Fr Delimat invited the congregation to offer their sympathy.

“Part of Karol will stay in Killarney,” the Polish priest said.

Afterwards, Fr Delimat said the Polish community was very affected by the death of Karol. Most of the Polish in Killarney are aged between 30 and 40 and have young families, he explained.

The body of Karol is being released on Wednesday to his family, gardaí confirmed.

Killarney has one of the largest Polish populations in Ireland, outside of the cities.

The results of a postmortem in the case completed on Monday were not being released by for operational reasons, said Supt Flor Murphy, who is heading the investigation.

The father of the child, a man in his 30s found with serious injuries in the apartment on Sunday, remains in hospital.

The child’s mother raised the alarm when she returned from work in a Killarney hotel.

Supt Flor Murphy said the scene is still sealed off.

He has appealed again to anyone who noticed or heard anything unusual in the Park Place Apartments in Killarney last Sunday afternoon or anyone with information to come forward.

Anyone who was in the vicinity of High Street between 1pm and 6pm that day should also come forward, he added.

An appointed family liaison officer is in contact with the family of the child, and a team of interpreters and Polish-speaking officers are involved in the investigation, Supt Murphy said.

The Diocese of Kerry has posted a notice on its website saying its thoughts and prayers are with the family and the Polish community.