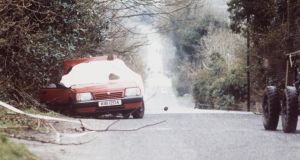 The scene of the shooting in March 1989 of RUC officers Bob Buchanan and Harry Breen on the south Armagh border. Photograph: Pacemaker

‘An Irishman’s Diary’, written by Kevin Myers and published by The Irish Times on March 10th, 2000, helped “reignite” a debate about a Garda mole within Dundalk Garda station who was helping the IRA, Judge Peter Smithwick reported.

He said Mr Myers based his diary on a book published a year earlier by Toby Harnden and also on the evidence of two unnamed sources, one of whom was a former paramilitary.

The judge recorded Mr Myers’s offer to go back to his sources to see if they would agree to speak to the tribunal’s legal team, and the fact that the sources did not.

Mr Myers “asserted as fact something which was his opinion based on relatively general information received from two sources,” the judge said. “I do not think that this was appropriate.”

The judge also referred to Mr Myers’s claims that information used in the production of an opinion piece need not be the same as that needed for a news report.

“He [Myers] elaborated on this, explaining that, in his view, a different level of evidential certainty is required to state matters as fact in a news report than is required when stating an opinion in a column. ‘The Irishman’s Diary’ piece fell into the latter category.

“While this may be the case, it does seem to me that the allegations of collusion in the article in question were stated as matters of fact, rather than as matters of opinion.”

Despite this criticism, the judge credited the journalist for accepting “he is not, with hindsight, satisfied with the manner in which it was written, both because it accidentally conflated information about two moles into a single mole, and because it was written more authoritatively than it should have been”.

Judge Smithwick credited the ‘Irishman’s Diary’ with being a key factor among those which prompted the then Garda commissioner “to re-examine the files”. Mr Myers last night said he felt “vindicated” by the Smithwick report.

“What he said in his assessment was that the evidence I gave was fair and frank, but I admitted there was a flaw in my original report, which I admitted when I gave evidence to him.The fact is his tribunal was called into existence because of the column I wrote.”