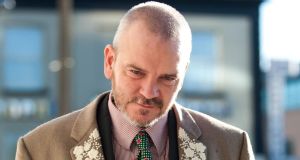 A file image of Thomas Byrne arriving at Dublin Circuit Criminal Court where he has pleaded not guilty to charges of theft and fraud. Photograph: Collins

The jury has begun its deliberations in the €52 million theft and fraud trial of former solicitor Thomas Byrne.

The jurors deliberated for two hours and 35 minutes today before being sent home for the night.

They have reached verdicts on some of the counts but Judge Patrick McCartan told them to return all the verdicts at once.

The charges allege he transferred clients’ homes into his name and then used them as collateral for property loans.

He is also accused of using invalid collateral to fraudulently borrow millions from six financial institutions.

He has pleaded not guilty at Dublin Circuit Criminal Court to 50 counts of theft, forgery, using forged documents and deception between 2004 and 2007. Today the jury heard a summary of the 23 day trial from Judge McCartan who also advised them on several matters of law.

Mr Byrne has told the trial that his former business partner John Kelly forced him to borrow €51.8 million from the banks because they would no longer lend to him.

The accused claimed that Mr Kelly threatened to kill him and his seven-year-old daughter if he didn’t co-operate.

Judge McCartan told the jurors that they may not consider this as defence as Mr Byrne was not under duress in the legal sense of the word.

The judge said the defence had not met several conditions necessary to run a legal defence of duress.

He said that if a defendant wishes to rely on duress, the threats against them must be linked to specific instances of offending instead of a general claim of intimidation.

A defendant claiming duress must also have gone to the authorities as soon as possible after the offence.

Judge McCartan said there was no evidence that Mr Byrne complained to gardaí­ at any stage about being threatened by Mr Kelly.

“The law says that’s not good enough,” the judge said.

Lastly the judge said that a defendant may not run a duress defence if they associated with suspected criminals in the first place.

Judge McCartan said that Mr Byrne was claiming duress “in a human sense” but can’t claim it in a legal sense.

The jury was also told that the fact that some of the banks got their money back does not mean a offence did not occur.

He said that the alleged offence occurred when the money landed in Mr Byrne’s account.

He said that was Mr Byrne’s claims that he intended to repay the bank loans in full also did not offer a defence.

The jury of seven men and five women began their deliberations at midday.

They were given three large folders containing 300 exhibits as well as a laptop to view documents digitally. A poster-sized flow chart was also provided detailing the allegations against Mr Byrne.