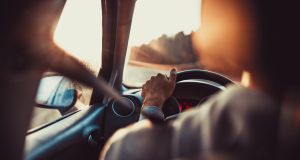 Impaired function: Enough alcohol to affect your driving could be present the morning after an evening session of drinking three pints of beer or three double whiskeys. Photograph: Thinkstock

That more drivers over the alcohol limit “the morning after the night before” are being apprehending by An Garda Síochána is not surprising. A combination of late-night binge-drinking followed by an early start means people are often driving with higher blood alcohol concentrations than they realise.

The rate of absorption of alcohol depends on several factors: gender, weight, pace of consumption, type of drink taken and alcohol concentration are just some of the variables.

Absorption is quickest when alcohol is drunk on an empty stomach and the concentration of alcohol is 20-30 per cent.

Food, particularly carbohydrates, delays absorption. On an empty stomach, blood alcohol concentration peaks about one hour after consumption, depending on the amount drunk. It then decreases in a more or less linear manner for the next four hours.

Alcohol is generally removed from the blood at a rate of about 15mg per 100ml per hour but this varies in different people and with the amount of alcohol drunk.

The legal limit for blood alcohol while driving in is 50mg/100ml. However, blood alcohol concentrations as low as 30mg/100ml are associated with an increased risk of accidental injury. At 80mg/100ml, the risk of a road traffic incident more than doubles.

But the health of your liver, whether you are taking medication and other factors can significantly change this rate.

Because there are so many variables, attempting to work out how soon after a drinking session you are under the driving limit is an uncertain science. Far better to follow the practice of commercial pilots: no alcohol for a minimum of eight hours “bottle to throttle”.