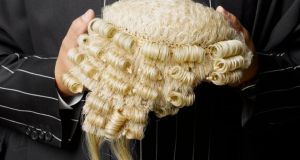 
Judges’ salaries range from €122,512 to €251,529, taking into account a cut imposed by the Government after the judicial pay referendum in 2011 and a subsequent reduction for new entrants from last year.

According to figures supplied by the Department of Public Expenditure and Reform, the Chief Justice earns €251,529, the president of the High Court €233,562 and a judge of the Supreme Court €219,191.


Revised rates
The salary of a High Court judge is €206,618, a Circuit Court judge €156,248 and a District Court judge €136,124. However, all of the above figures apply to judges appointed prior to 2012. Members of the bench appointed from last year onwards will be on lower salaries. For example, a Supreme Court judge appointed this month would earn €197,272 – more than €20,000 less than longer-serving colleagues.

Pension and lump-sum benefits for judges are calculated by reference to total reckonable service and salary on the last day of service. In the case of District Court judges, pension comprises 1/40th of salary per year of service.

For all other judges, including those in the Supreme Court and High Court, it is 1/40th of salary for each of the first five years’ service and 3/80ths of salary for each subsequent year of service – subject in all cases to a maximum of ½ times salary.

A spokesman for the department said this accrual rate was almost twice as fast as for public servants.

The Association of Judges of Ireland says take-home pay for serving judges has fallen by a third since 2009 and up to 45 per cent for new judges. It has expressed “grave concerns” about pension terms for incoming judges, who – under the Public Service Pensions (Single Scheme and Other Provisions) Act 2012 – will have to serve 20 years instead of 15 before they can draw a full pension.

Future appointees must also pay a 13 per cent contribution towards their pension, instead of 4 per cent by serving judges.

The association said the extension to 20 years before a full pension entitlement is acquired had “considerable consequences for both quality and experience” of future candidates.

In January, Minister for Justice Alan Shatter wrote to the Chief Justice suggesting judges might make savings by working longer hours and reducing the court vacations.


Longer hours
In his letter to the Chief Justice, Mrs Justice Susan Denham, it is understood Mr Shatter requested the judiciary to consider how savings might be effected by them through an extension of court sitting hours and extension of court terms.

Normal court sitting hours are from 10.30am or 11am to 4pm, although some sittings extend beyond those hours while others conclude earlier. The higher courts sit for about 40 weeks and their holidays include a two-month vacation over August and September. The District Court sits all year.