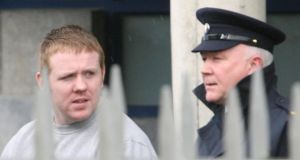 A 2006 file photograph of John Dundon.

Career criminal John Dundon has plenty of form in threatening to kill people.

With two such convictions and lengthy prison sentences behind him, and now just weeks off his 31st birthday, the gangster faces life behind bars for the murder of an innocent man.

The illiterate middle brother of the notorious Limerick family has been found guilty of ordering the hit that killed Shane Geoghegan and left their home city and a nation reeling.

Dundon, who was on hunger strike over the case, is already in jail for threatening to kill his younger brother’s ex-partner April Collins, who turned state witness and was paramount in securing the murder charge against him.

The mother-of-four has been left fearing for her life, with 24-hour Garda protection. She revealed she was in a room when Dundon, a father-of-two, ordered that John “Pitchfork” McNamara be shot dead in November 2008.

But one night later the gunman, convicted murderer Barry Doyle, shot dead the wrong man. The intended victim’s neighbour, rugby player Shane Geoghegan, was gunned down, shot five times near the home he shared with his girlfriend Jenna Barry.

For more than three years it was feared no one would be caught for the murder until Barry was charged, convicted and jailed for life in February last year.

The case against him was based on the evidence given by Collins who admits she may have been able to save his life if she spoke out at the time.

Dundon, 30, of Hyde Road in Limerick, is a brother of Dessie, Wayne and Ger Dundon who formed the notorious McCarthy-Dundon gang with their cousins. For years they were arch rivals of the city’s other most-feared criminals, the Keane-Collopy gang.

More than 10 people have been killed in their bloody turf war which terrorised communities in Limerick. But in recent years all the key players have been taken off the streets, with most behind bars as a result of a gardai crackdown.

Dessie is serving life for the 2002 murder of Kieran Keane, while Ger was jailed for five years for violent disorder.

Wayne, who is already in jail for threatening to kill three members of April’s family, is waiting to stand trial in the non-jury Special Criminal Court for the murder of innocent amusement arcade boss Roy Collins. The businessman’s family were later forced to flee the jurisdiction under witness protection.

John, who turns 31 later this month, has 40 previous convictions, mainly for road traffic offences, and was handed lengthy sentences for threatening to kill April and another state witness, Owen Tracy, in 2005.

Chief Superintendent Dave Sheehan told the court Dundon was also jailed for 20 months by the Limerick Circuit Court in January 2005 for threatening to damage property.

The charge related to threats to burn down the house of a prison officer while he was in Limerick prison. A car belonging to the officer was later burned out.

Their father Kenneth, who has attended his son’s trial, is a convicted killer while their mother Anne died more than 18 months ago when she was knocked down by a car in London.

But the murder case against Dundon was dogged with delays. On the day his trial was due to start last month he dramatically sacked his legal team and panicked when he realised he was about to represent himself in front of three of Ireland’s top judges in the Special Criminal Court.

He left school at nine, he said, cannot read or write and was “out of his depth” before he dramatically fainted in a cell, cut his head and was rushed to hospital.

A new legal team appointed the next day promised “there will be no messing around”.

Dundon did not take the stand. Instead the only defence witness was convicted criminal Liam “Lika” Casey who denied claims he was in the house when the hit was ordered.

April and her sister Lisa also had to be treated in hospital during the emotional case.