Is it time to ease the rules and allow lawyers advertise freely?

The strict rules governing advertising by solicitors and barristers is ‘harmful’ to consumers, critics claim 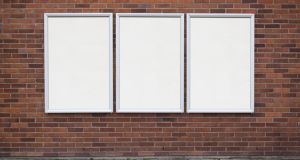 Blank ad boards: a 2006 Competition Authority report cited the “near blanket-ban on advertising by barristers and some unnecessary restrictions on solicitor advertising” as factors limiting access, choice and value for money for consumers of legal services

Lawyers, unlike other professionals, are restricted from advertising freely by their governing bodies.

Barristers are restricted by the rules of the Bar Council, while the Law Society’s regulations on solicitor advertising are more liberal.

At least one of the reasons is to avoid ads like the following: in a television commercial, Dallas-based lawyer Brian Loncar calls himself “the strong arm” and encourages potential customers to call 1-800-HURT. The ad ends with the message: “Here at Loncar and Associates, it’s raining car wrecks. So call me now, and I’ll make them pay.”

So-called “ambulance chasing” is considered a threat to the dignity of the legal profession in Ireland.

It found competition was “severely hampered by many unnecessary restrictions” and that those restrictions should be removed “so that consumers can benefit from greater competition in legal services”.

The report cited the “near blanket-ban on advertising by barristers and some unnecessary restrictions on solicitor advertising”.

The Bar Council took some heed of this report and changed the rules regarding advertising for barristers in May 2008. Now, barristers may advertise by placing certain information about themselves on the Bar Council’s website.

With regard to further changes, Bar Council chairman David Barniville does not believe large-scale advertising would increase competition among barristers, as barristers are usually obtained through a solicitor rather than directly by members of the public.

Mr Barniville said the primary danger of unrestrained advertising of legal services is the “race to the bottom” and the “encouragement of vulnerable persons to embark upon litigation which may have little or no prospects of success”.

But if a person is entitled to bring a claim, should he or she not bring one?

While solicitors are not barred from advertising, there are many other restrictions in place limiting the manner and content of the advertisements. In its report, the Competition Authority found these restrictions “unnecessary”.

Mr Murphy said the Oireachtas formed a view, codified by the Solicitors (Amendment) Act of 2002, that this kind of advertisement is contrary to the public good. It was restricted to protect the public interest.

Prior to the 2002 Act (and the Law Society’s advertising regulations that followed), the State had introduced “quite a liberal regime of solicitor advertising”.

“Then, in the late 1990s, there was major public controversy about solicitor advertising focusing on personal injury litigation,” Mr Murphy said, which led to the regulations as they stand now.

The solicitor advertising regulations specifically prohibit ads that are in bad taste or are likely to bring the profession into disrepute, and it severely restricts advertising for personal injury damages.

The location of advertisements is also restricted; solicitors cannot advertise on the back of buses or next to death notices. Of this particular restriction, Mr Murphy noted there had been one complaint about an ad on the roof of an ambulance and another advertising probate services in a funeral home.

Language suggesting legal services will be provided at no cost, or that payment will be contingent on the outcome of the case, such as “no foal, no fee”, “free first consultation” or “most cases settled out of court”, is also prohibited.

Ads cannot contain cartoons, dramatic or emotive words or pictures and cannot refer to calamitous events, such as train or bus crashes. Solicitors cannot advertise their willingness to make home or hospital visits.

“The fact that barristers can’t really advertise is probably rooted in tradition, ie, it’s a network of gentlemen reputed for their skills who wouldn’t do something so unseemly as advertise their services or undercut their colleagues,” said one barrister who did not want to be named.

She added: “It’s probably good that it prevents the ‘ambulance chaser’ and ‘no foal no fee’ ads because the courts should be the last port of call rather than the first.”

For solicitors, this issue affects small firms and solo practitioners rather than large firms, which would not really need to advertise.

Small and solo firms, those just starting out and without an established reputation, would garner the most benefit from being able to advertise.

One solicitor who recently set up his own solo practice said: “You want competition in the provision of legal services. One way to do that is through advertisement. The position of the Law Society who regulates has always been very conservative. Whether they’re too conservative depends on your view of the free market. I essentially will not advertise at all.

“The Law Society doesn’t like the notion of ambulance chasing. It would bring the profession into disrepute. I would like the integrity of the profession to be maintained.

“But if we’re talking about solicitors as businesses, then they are probably unduly restricted.” he added.

1 Cardiologist saved by paramedics after heart attack at Dublin Airport
2 Two Irish passengers test positive for coronavirus
3 Body part found on Donegal beach by person out walking
4 Mediterranean diet fuels bacteria that may reduce old-age frailty
5 Q&A: How long could it take to form a new government after Election 2020? Could things get messy?
Real news has value SUBSCRIBE