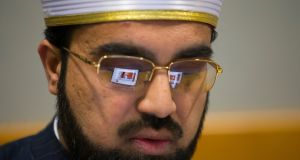 Sheikh Umar Al-Qadri, the chairman of Impic, welcomed the cancellation by Dr Othman Al-Khamees of his visit to the Islamic Foundation of Ireland saying it was “an achievement of the vigilant Muslims in Ireland”. Photograph: Patrick Browne

It has also suggested the Department of Justice might incorporate the signing of the declaration into the visa conditions for visiting speakers.

The declaration calls on those who sign it to state they “unequivocally reject, disown and condemn all terrorism committed in the name of Islam by any militant group”, and would not promote sectarianism while in Ireland or that people should travel to take part in foreign conflicts.

The development comes in the wake of controversy over two Muslim speakers who were invited to Ireland to give talks last week, one of whom cancelled his visit.

The chairman of Impic and imam of the Islamic Centre Ireland, Sheikh Umar Al-Qadri, welcomed the cancellation by Dr Othman Al-Khamees of his visit to the Islamic Foundation of Ireland saying it was “an achievement of the vigilant Muslims in Ireland”.

Visiting Islamic scholar Dr Khaled Alotaibi told The Irish Times last week he always encouraged young people not to go to fight. “I call on youth not to participate in violence.” He said he and Dr Khamees were “totally anti-radicalisation, totally against violence”. Followers of Wahhabism Both Kuwaiti clerics are followers of Wahhabism. Dr Alotaibi said Sheikh Al-Qadri’s characterisation of the nature of Wahhabism was incorrect and that it was not intolerant of other religions and other forms of Islam.

A spokesman for the Department of Justice said a number of broad factors are generally taken into account in deciding on visa applications, including any concerns about public order, national security or danger to individuals.

“In the wider context of the matters raised, it is, of course, essential that in relation to issues such as this entire communities are not stigmatised and that it is recognised that the vast majority of people in minority communities wish to go about their daily lives in peace.”

A South African Sunni scholar, Sheikh Fakhruddin Owaisi, who will visit Dublin this month, will be the first to sign the anti-extremism statement, Impic said in a statement.