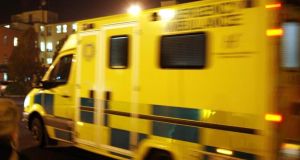 A very overweight and ill woman clad only in a nightdress was left out in torrential rain for two hours while ambulance crew waited for the back-up they felt necessary to move her safely from her mobile home to a waiting ambulance, the Coroner’s Court in Killarney, Co Kerry, heard yesterday.

When she eventually was placed in the ambulance Cobie Pols (73) from the Netherlands, suffered cardiac failure and died, the inquest was told.It would have been too dangerous for the two-man ambulance crew to move the 25-stone woman down a narrow, slippery path and makeshift steps on one of the worst nights of the year – but protocol demanded they get approval from the HSE to call out the fire brigade to help, the inquest heard.

Second ambulance
A second ambulance requested as back-up also did not arrive for some time because of the system of call-out in operation.

Ms Pols was a regular visitor to the home of Wilma and Johnny O’Connor, a former Fine Gael Kerry county councillor at Killorglin. She and her husband Dirk Varley had at one time lived in south Kerry, but had moved back to the Netherlands eight years ago. In the early hours of October 17th last year while staying in a mobile home in the yard of the O’Connors’ home, Ms Pols became ill and complained of leg pain. The doctor who attended at about 4.15am decided she would have to go to hospital by ambulance.

An ambulance arrived at 4.30am with two crew and they decided the fire brigade had to be called to move her out of the mobile home, Ms O’Connor said.Eventually six firemen formed a chain and moved her wheelchair into the ambulance.

Coroner Terence Casey said: “I am delighted to hear the protocol of calling for help from the fire brigade has been changed.”

‘Give him time,’ mother urges court about severely brain-injured child

‘He is not able to talk but he has a heartbeat and a pulse,’ says woman opposing palliative care for son