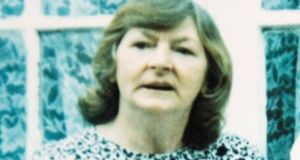 Rosie Hanrahan who was found dead at her home at New Road, Thomondgate, Limerick in December 2017. Photograph: Liam Burke/Press 22

An inquest into the death of a Limerick pensioner, who was found murdered in her home last Christmas, was opened and adjourned on Tuesday.

The body of Rose Hanrahan (78), was discovered by relatives in her bungalow, at New Road Thomondgate, on December 15th, 2017.

Gardaí have not disclosed how she died, however it is understood she was strangled. The chief suspect in the murder investigation remains at large.

It is understood Ms Hanrahan was killed during a botched attempted robbery at her home.

According to reports gardaí have identified her killer on CCTV and investigators have spoken to more than 1,300 people about the case.

The suspect is reported to have left Ireland on a ferry for France. However his exact whereabouts are not known although he is believed to be in Eastern Europe.

Gardaí are liaising with Interpol and Europol as part of the investigation.

Investigators are also said to be using facial recognition technology across Europe to try to find the suspect.

A forensic sweep for clothing fibres as well as human DNA was also carried out at Ms Hanrahan’s home by specialist gardaí.

Gardaí would not comment on reports that they have CCTV footage of the killer stalking Ms Hanrahan while she did her shopping at a supermarket in Limerick on the day she died.

One line of inquiry is her killer wanted to steal her ATM card and passcode and may have followed her home.

Limerick city coroner John McNamara told Ms Hanrahan’s family members, including two of her sisters, a niece, and a brother-in-law: “I know it’s difficult for any family to come to inquests, to hear details surrounding the death of a loved one.”

Explaining the process to the family, Mr McNamara said: “An inquest is a public inquiry into a person’s death. You are entitled to ask questions; it is not a court as such.”

“If you have any questions, feel free to ask them,” he said.

“There is a criminal investigation ongoing at the moment,” Insp Reidy said.

Mr McNamara explained that, “under the Coroner’s Act, I’m obliged to grant the (adjournment).”

He told Ms Hanrahan’s family: “We don’t want to give evidence that might have an impact on, or, compromise the ongoing Garda investigation.”

Adjourning the inquest, the coroner told the family: “I’m sorry, I don’t have an exact date for you. We’ll have to wait until there are developments in the Garda investigation.”

Garda sources said the investigation is progressing and they will keep Ms Hanrahan’s family informed.