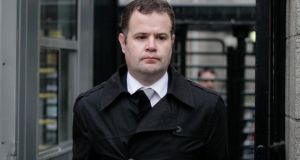 A detective garda who showed “incredible bravery” after he had a loaded gun pointed at him during a Crumlin bank robbery has been awarded almost €70,000 damages in the High Court.

Mr Justice Bernard Barton said Garda Robert Reilly acted with courage during a totally frightening experience eight and a half years ago as he went on with his duty and confronted the two heavily disguised armed robbers who were leaving the bank.

Judge Barton said Garda Reilly had answered a radio call for assistance after a member of the public reported that a bank robbery was taking place at the AIB branch in Crumlin, Dublin, on June 3rd, 2006.

The judge said, during a Garda Compensation hearing, that Garda Reilly followed the robbers, Darren Hamill and John Foy, in a nearby car park as they attempted to escape in a car.

Garda Reilly, who was armed, stopped a couple of metres away from the car and asked them to drop their guns. The man in the passenger seat had got out and threatened to shoot Garda Reilly.

The judge said Garda Reilly, who believed his life was at risk as the man was still pointing the gun at him, dived for cover, and discharged a shot, lodging a bullet in one of the car doors.

Reinforcement officers arrived and the men were eventually taken into custody and later arrested.

Judge Barton said Garda Reilly had relived the incident on numerous occasions as he had to attend court hearings when the men were applying for bail.

Garda Reilly, who had later started to “ruminate” the incident, had developed post-traumatic stress disorder for which he had needed counselling and medication. His condition had improved.

Judge Barton said Garda Reilly, who qualified for a law degree since the incident, had been promoted this year and was hoping to become an Inspector in the coming years.

The judge, awarding him €68,636 damages, said Garda Reilly had learned that a decoration for bravery had been recommended, but he had never received any formal award.