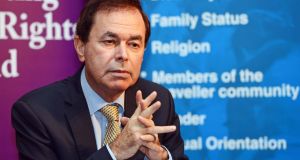 A Government proposal which would allow the taking of DNA samples for “mass screening” of certain “classes”of individuals should be prohibited, the national human rights watchdog has said.

The Irish Human Rights and Equality Commission (IHREC) designate said it was concerned that the identification of a class of persons “could potentially be directed, either explicitly or inadvertently, at a racial or ethnic minority in the State”.

This would be “wholly unacceptable” and the Bill proposing such screening “should explicitly prohibit such identification”, it said.

The scope of the proposed DNA database must be limited to crime investigation.

Members of the public may also be asked to give bodily samples as “volunteers” or as part of a mass screening.

Mass screening of groups of people defined by certain characteristics will be permitted in situations where there are “reasonable grounds” for believing that such mass screening is likely to further the investigation of an offence.

The IHREC said it acknowledged the potential of a DNA database system as a tool for the Garda Síochána for crime investigation. It said the use of “reasonable force” by gardaí in taking DNA samples carried “significant risks”.

It recommended that the Bill include “more safeguards which are essential to ensure that the Bill does not give rise to violations of human rights”.

Acting chair of the IHREC, David Joyce, said the organisation considered that the power to take bodily samples, solely for the purpose of entering a DNA profile on the planned DNA database system, and not for investigating an offence for which a suspect is detained, was “too broad”.

When he announced the Bill last year, Minister for Justice Alan Shatter said he had made it a priority to bring forward comprehensive legislation to facilitate “the optimal use of DNA in the fight against crime and to enhance cooperation within the EU and with other countries”.

He was determined that the legislation “would fully respect human rights”.

Mr Shatter said the intelligence generated would be “invaluable” to gardaí in relation to identifying “prolific offenders involved in volume crime such as burglary but also in relation to serious offences against the person, such as homicide and sexual offences”.