Case, which must be lodged in 21 days, may focus on phone records and questioning 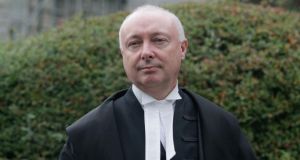 Mr Justice Tony Hunt found there was no blanket right to have a solicitor present during questioning. Photograph: Collins Courts

Graham Dwyer has been granted a legal aid certificate following his sentencing for the murder of Elaine O’Hara.

Remy Farrell SC applied to trial judge Mr Justice Tony Hunt at the end of his client’s sentence hearing, requesting the certificate “in the event of an appeal”.

Legal aid is provided under the Criminal Justice (Legal Aid) Act, 1962 and, unlike civil legal aid, it does not require a financial contribution from the applicant. A judge takes into account the means of the applicant when approving an application.

Dwyer was originally granted legal aid in November 2013, after he was charged with Elaine O’Hara’s murder. The court was told he no longer had a salary and his family home was in mortgage arrears.

He now has 21 days to lodge an appeal against his murder conviction.

His case will be heard by the Court of Appeal, established last October, and the grounds for the appeal are likely to include the procurement of telephone records and the questioning of Dwyer while in custody.

Other issues, the decision to allow American woman Darci Day to give evidence by video link, the inclusion of text messages recovered from Ms O’Hara’s computer and the viewing of videos of Dwyer having sex with Ms O’Hara and other women and stabbing them, are also likely to be raised.

The information was obtained under the Communications (Retention of Data) Act, 2011.

This legislation requires companies to retain data on phone users for two years, including records concerning the date, time and nature of the contact between the phone in question and other phones.

It also includes the particular phone mast cell through which the call or text was routed.

The Irish legislation was introduced following an EU directive in 2005, the data retention directive. In April last year, after a case taken by Digital Rights Ireland, the European Court of Justice found the EU directive was in breach of the EU Charter of Fundamental Rights, in particular in relation to privacy, and ruled it illegal.

During Dwyer’s trial, Mr Farrell maintained this meant the Irish legislation was illegal and by extension the data collected on Dwyer was illegal. Mr Justice Hunt ruled against him.

It ruled a person is entitled to legal advice before questioning, which Dwyer got, but also suggested there may be a right to have a solicitor present during questioning. Mr Farrell said that right pre-existed at the time of Dwyer’s arrest.

Mr Justice Hunt found there was no blanket right to have a solicitor present during questioning, but he did find, “on the basis of the trend and opinion in Gormley”, that there was a possibility of such a right being present in some cases, based on “the right being requested, being reasoned and being considered in a reasoned way”.

Separately, Dwyer’s civil action at the High Court against the retention of his phone data, filed in January, has not progressed.